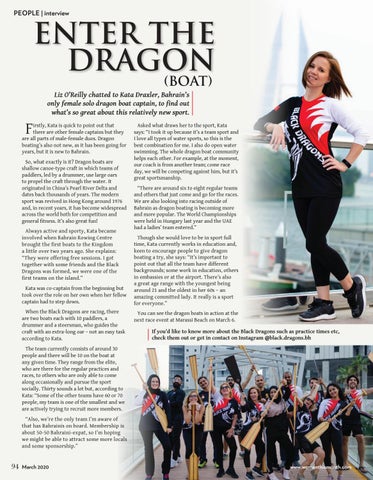 irstly, Kata is quick to point out that there are other female captains but they are all parts of male-female duos. Dragon boating’s also not new, as it has been going for years, but it is new to Bahrain. So, what exactly is it? Dragon boats are shallow canoe-type craft in which teams of paddlers, led by a drummer, use large oars to propel the craft through the water. It originated in China’s Pearl River Delta and dates back thousands of years. The modern sport was revived in Hong Kong around 1976 and, in recent years, it has become widespread across the world both for competition and general fitness. It’s also great fun! Always active and sporty, Kata became involved when Bahrain Rowing Centre brought the first boats to the Kingdom a little over two years ago. She explains: “They were offering free sessions. I got together with some friends and the Black Dragons was formed, we were one of the first teams on the island.” Kata was co-captain from the beginning but took over the role on her own when her fellow captain had to step down. When the Black Dragons are racing, there are two boats each with 10 paddlers, a drummer and a steersman, who guides the craft with an extra-long oar – not an easy task according to Kata.

Asked what draws her to the sport, Kata says: “I took it up because it’s a team sport and I love all types of water sports, so this is the best combination for me. I also do open water swimming. The whole dragon boat community helps each other. For example, at the moment, our coach is from another team; come race day, we will be competing against him, but it’s great sportsmanship. “There are around six to eight regular teams and others that just come and go for the races. We are also looking into racing outside of Bahrain as dragon boating is becoming more and more popular. The World Championships were held in Hungary last year and the UAE had a ladies’ team entered.” Though she would love to be in sport full time, Kata currently works in education and, keen to encourage people to give dragon boating a try, she says: “It’s important to point out that all the team have different backgrounds; some work in education, others in embassies or at the airport. There’s also a great age range with the youngest being around 21 and the oldest in her 60s – an amazing committed lady. It really is a sport for everyone.” You can see the dragon boats in action at the next race event at Marassi Beach on March 6. If you’d like to know more about the Black Dragons such as practice times etc, check them out or get in contact on Instagram @black.dragons.bh

The team currently consists of around 30 people and there will be 10 on the boat at any given time. They range from the elite, who are there for the regular practices and races, to others who are only able to come along occasionally and pursue the sport socially. Thirty sounds a lot but, according to Kata: “Some of the other teams have 60 or 70 people, my team is one of the smallest and we are actively trying to recruit more members. “Also, we’re the only team I’m aware of that has Bahrainis on board. Membership is about 50-50 Bahraini-expat, so I’m hoping we might be able to attract some more locals and some sponsorship.”