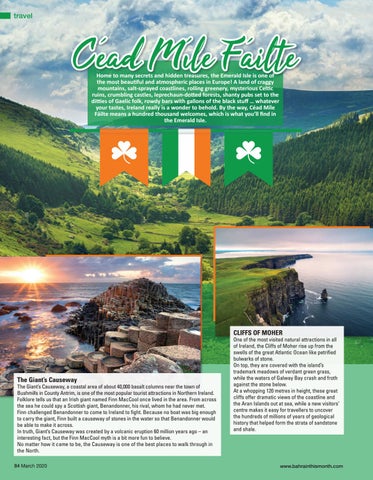 Céad Míle Fáilte Home to many secrets and hidden treasures, the Emerald Isle is one of the most beautiful and atmospheric places in Europe! A land of craggy mountains, salt-sprayed coastlines, rolling greenery, mysterious Celtic ruins, crumbling castles, leprechaun-dotted forests, shanty pubs set to the ditties of Gaelic folk, rowdy bars with gallons of the black stuff … whatever your tastes, Ireland really is a wonder to behold. By the way, Céad Míle Fáilte means a hundred thousand welcomes, which is what you’ll find in the Emerald Isle.

The Giant’s Causeway, a coastal area of about 40,000 basalt columns near the town of Bushmills in County Antrim, is one of the most popular tourist attractions in Northern Ireland. Folklore tells us that an Irish giant named Finn MacCool once lived in the area. From across the sea he could spy a Scottish giant, Benandonner, his rival, whom he had never met. Finn challenged Benandonner to come to Ireland to fight. Because no boat was big enough to carry the giant, Finn built a causeway of stones in the water so that Benandonner would be able to make it across. In truth, Giant’s Causeway was created by a volcanic eruption 60 million years ago – an interesting fact, but the Finn MacCool myth is a bit more fun to believe. No matter how it came to be, the Causeway is one of the best places to walk through in the North. 84 March 2020

One of the most visited natural attractions in all of Ireland, the Cliffs of Moher rise up from the swells of the great Atlantic Ocean like petrified bulwarks of stone. On top, they are covered with the island’s trademark meadows of verdant green grass, while the waters of Galway Bay crash and froth against the stone below. At a whopping 120 metres in height, these great cliffs offer dramatic views of the coastline and the Aran Islands out at sea, while a new visitors’ centre makes it easy for travellers to uncover the hundreds of millions of years of geological history that helped form the strata of sandstone and shale.