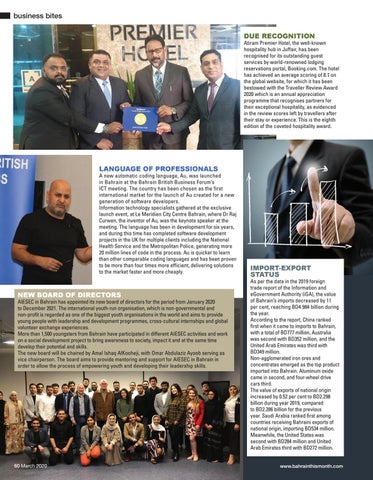 Atiram Premier Hotel, the well-known hospitality hub in Juffair, has been recognised for its outstanding guest services by world-renowned lodging reservations portal, Booking.com. The hotel has achieved an average scoring of 8.1 on the global website, for which it has been bestowed with the Traveller Review Award 2020 which is an annual appreciation programme that recognises partners for their exceptional hospitality, as evidenced in the review scores left by travellers after their stay or experience. This is the eighth edition of the coveted hospitality award.

A new automatic coding language, Au, was launched in Bahrain at the Bahrain British Business Forumâ&#x20AC;&#x2122;s ICT meeting. The country has been chosen as the first international market for the launch of Au created for a new generation of software developers. Information technology specialists gathered at the exclusive launch event, at Le Meridien City Centre Bahrain, where Dr Raj Curwen, the inventor of Au, was the keynote speaker at the meeting. The language has been in development for six years, and during this time has completed software development projects in the UK for multiple clients including the National Health Service and the Metropolitan Police, generating more 20 million lines of code in the process. Au is quicker to learn than other comparable coding languages and has been proven to be more than four times more efficient, delivering solutions to the market faster and more cheaply.

NEW BOARD OF DIRECTORS

AIESEC in Bahrain has appointed its new board of directors for the period from January 2020 to December 2021. The international youth-run organisation, which is non-governmental and non-profit is regarded as one of the biggest youth organisations in the world and aims to provide young people with leadership and development programmes, cross-cultural internships and global volunteer exchange experiences. More than 1,500 youngsters from Bahrain have participated in different AIESEC activities and work on a social development project to bring awareness to society, impact it and at the same time develop their potential and skills. The new board will be chaired by Amal Ishaq AlKooheji, with Omar Abdulaziz Ayoob serving as vice chairperson. The board aims to provide mentoring and support for AIESEC in Bahrain in order to allow the process of empowering youth and developing their leadership skills.

As per the data in the 2019 foreign trade report of the Information and eGovernment Authority (iGA), the value of Bahrainâ&#x20AC;&#x2122;s imports decreased by 11 per cent, reaching BD4.984 billion during the year. According to the report, China ranked first when it came to imports to Bahrain, with a total of BD777 million, Australia was second with BD352 million, and the United Arab Emirates was third with BD349 million. Non-agglomerated iron ores and concentrates emerged as the top product imported into Bahrain. Aluminum oxide came in second, and four-wheel drive cars third. The value of exports of national origin increased by 0.52 per cent to BD2.298 billion during year 2019, compared to BD2.286 billion for the previous year. Saudi Arabia ranked first among countries receiving Bahraini exports of national origin, importing BD534 million. Meanwhile, the United States was second with BD284 million and United Arab Emirates third with BD272 million. www.bahrainthismonth.com