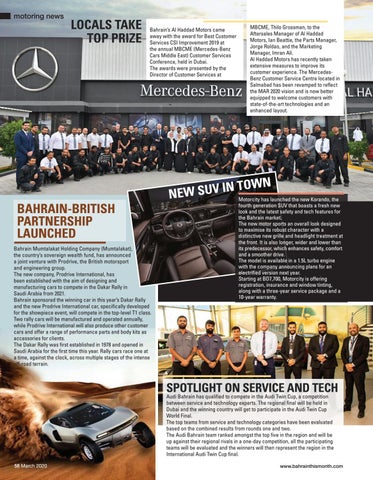 MBCME, Thilo Grossman, to the Aftersales Manager of Al Haddad Motors, Ian Beattie, the Parts Manager, Jorge Roldao, and the Marketing Manager, Imran Ali. Al Haddad Motors has recently taken extensive measures to improve its customer experience. The MercedesBenz Customer Service Centre located in Salmabad has been revamped to reflect the MAR 2020 vision and is now better equipped to welcome customers with state-of-the-art technologies and an enhanced layout.

BAHRAIN-BRITISH PARTNERSHIP LAUNCHED Bahrain Mumtalakat Holding Company (Mumtalakat), the country’s sovereign wealth fund, has announced a joint venture with Prodrive, the British motorsport and engineering group. The new company, Prodrive International, has been established with the aim of designing and manufacturing cars to compete in the Dakar Rally in Saudi Arabia from 2021. Bahrain sponsored the winning car in this year’s Dakar Rally and the new Prodrive International car, specifically developed for the showpiece event, will compete in the top-level T1 class. Two rally cars will be manufactured and operated annually, while Prodrive International will also produce other customer cars and offer a range of performance parts and body kits as accessories for clients. The Dakar Rally was first established in 1978 and opened in Saudi Arabia for the first time this year. Rally cars race one at a time, against the clock, across multiple stages of the intense off-road terrain.

Motorcity has launched the new Korando, the fourth generation SUV that boasts a fresh new look and the latest safety and tech features for the Bahrain market. The new motor sports an overall look designed to maximise its robust character with a distinctive new grille and headlight treatment at the front. It is also longer, wider and lower than its predecessor, which enhances safety, comfort and a smoother drive. The model is available in a 1.5L turbo engine with the company announcing plans for an electrified version next year. Starting at BD7,700, Motorcity is offering registration, insurance and window tinting, along with a three-year service package and a 10-year warranty.

SPOTLIGHT ON SERVICE AND TECH

Audi Bahrain has qualified to compete in the Audi Twin Cup, a competition between service and technology experts. The regional final will be held in Dubai and the winning country will get to participate in the Audi Twin Cup World Final. The top teams from service and technology categories have been evaluated based on the combined results from rounds one and two. The Audi Bahrain team ranked amongst the top five in the region and will be up against their regional rivals in a one-day competition, all the participating teams will be evaluated and the winners will then represent the region in the International Audi Twin Cup final. 58 March 2020