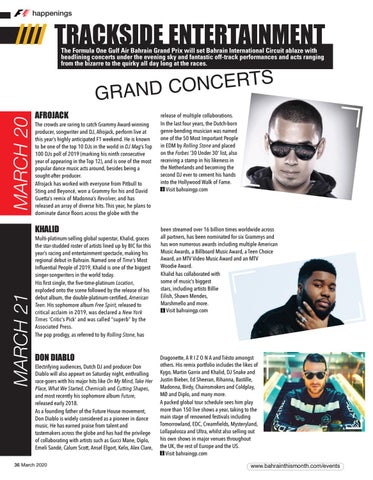 The Formula One Gulf Air Bahrain Grand Prix will set Bahrain International Circuit ablaze with headlining concerts under the evening sky and fantastic off-track performances and acts ranging from the bizarre to the quirky all day long at the races.

The crowds are raring to catch Grammy Award-winning producer, songwriter and DJ, Afrojack, perform live at this year’s highly anticipated F1 weekend. He is known to be one of the top 10 DJs in the world in DJ Mag’s Top 100 DJs poll of 2019 (marking his ninth consecutive year of appearing in the Top 12), and is one of the most popular dance music acts around, besides being a sought-after producer. Afrojack has worked with everyone from Pitbull to Sting and Beyoncé, won a Grammy for his and David Guetta’s remix of Madonna’s Revolver, and has released an array of diverse hits. This year, he plans to dominate dance floors across the globe with the

Multi-platinum-selling global superstar, Khalid, graces the star-studded roster of artists lined up by BIC for this year’s racing and entertainment spectacle, making his regional debut in Bahrain. Named one of Time’s Most Influential People of 2019, Khalid is one of the biggest singer-songwriters in the world today. His first single, the five-time-platinum Location, exploded onto the scene followed by the release of his debut album, the double-platinum-certified, American Teen. His sophomore album Free Spirit, released to critical acclaim in 2019, was declared a New York Times ‘Critic’s Pick’ and was called “superb” by the Associated Press. The pop prodigy, as referred to by Rolling Stone, has

Electrifying audiences, Dutch DJ and producer Don Diablo will also appeart on Saturday night, enthralling race-goers with his major hits like On My Mind, Take Her Place, What We Started, Chemicals and Cutting Shapes, and most recently his sophomore album Future, released early 2018. As a founding father of the Future House movement, Don Diablo is widely considered as a pioneer in dance music. He has earned praise from talent and tastemakers across the globe and has had the privilege of collaborating with artists such as Gucci Mane, Diplo, Emeli Sandé, Calum Scott, Ansel Elgort, Kelis, Alex Clare,

release of multiple collaborations. In the last four years, the Dutch-born genre-bending musician was named one of the 50 Most Important People in EDM by Rolling Stone and placed on the Forbes ‘30 Under 30’ list, also receiving a stamp in his likeness in the Netherlands and becoming the second DJ ever to cement his hands into the Hollywood Walk of Fame. Visit bahraingp.com

been streamed over 16 billion times worldwide across all partners, has been nominated for six Grammys and has won numerous awards including multiple American Music Awards, a Billboard Music Award, a Teen Choice Award, an MTV Video Music Award and an MTV Woodie Award. Khalid has collaborated with some of music’s biggest stars, including artists Billie Eilish, Shawn Mendes, Marshmello and more. Visit bahraingp.com

Dragonette, A R I Z O N A and Tiësto amongst others. His remix portfolio includes the likes of Kygo, Martin Garrix and Khalid, DJ Snake and Justin Bieber, Ed Sheeran, Rihanna, Bastille, Madonna, Birdy, Chainsmokers and Coldplay, MØ and Diplo, and many more. A packed global tour schedule sees him play more than 150 live shows a year, taking to the main stage of renowned festivals including Tomorrowland, EDC, Creamfields, Mysteryland, Lollapalooza and Ultra, whilst also selling out his own shows in major venues throughout the UK, the rest of Europe and the US. Visit bahraingp.com www.bahrainthismonth.com/events