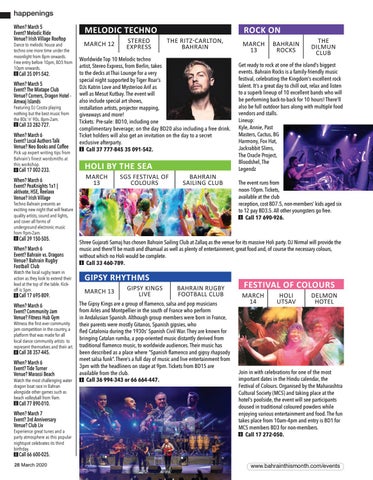 Dance to melodic house and techno one more time under the moonlight from 8pm onwards. Free entry before 10pm, BD5 from 10pm onwards.

Pick up expert writing tips from Bahrain’s finest wordsmiths at this workshop.

Worldwide Top 10 Melodic techno artist, Stereo Express, from Berlin, takes to the decks at Thai Lounge for a very special night supported by Tiger Roar’s DJs Katrin Love and Mysterioo Arif as well as Mesut Kutbay. The event will also include special art shows, installation artists, projector mapping, giveaways and more! Tickets: Pre-sale: BD10, including one complimentary beverage; on the day BD20 also including a free drink. Ticket holders will also get an invitation on the day to a secret exclusive afterparty. Call 37 777-845 35 091-542.

HOLI BY THE SEA MARCH 13

Techno Bahrain presents an exciting new night that will feature quality artists, sound and lights, and cover all forms of underground electronic music from 9pm-2am.

Watch the local rugby team in action as they look to extend their lead at the top of the table. Kickoff is 5pm.

Witness the first ever community jam competition in the country, a platform that was made for all local dance community artists to represent themselves and their art.

Watch the most challenging water dragon boat race in Bahran alongside other games such as beach volleyball from 9am.

Experience great tunes and a party atmosphere as this popular nightspot celebrates its third birthday.

Get ready to rock at one of the island’s biggest events. Bahrain Rocks is a family-friendly music festival, celebrating the Kingdom’s excellent rock talent. It’s a great day to chill out, relax and listen to a superb lineup of 10 excellent bands who will be performing back-to-back for 10 hours! There’ll also be full outdoor bars along with multiple food vendors and stalls. Lineup: Kyle, Annie, Past Masters, Cactus, BG Harmony, Fox Hat, Jackrabbit Slims, The Oracle Project, Bloodshel, The Legendz The event runs from noon-10pm. Tickets, available at the club reception, cost BD7.5, non-members’ kids aged six to 12 pay BD3.5. All other youngsters go free. Call 17 690-926.

Shree Gujarati Samaj has chosen Bahrain Sailing Club at Zallaq as the venue for its massive Holi party. DJ Nirmal will provide the music and there’ll be masti and dhamaal as well as plenty of entertainment, great food and, of course the necessary colours, without which no Holi would be complete. Call 33 460-789.

The Gipsy Kings are a group of flamenco, salsa and pop musicians from Arles and Montpellier in the south of France who perform in Andalusian Spanish. Although group members were born in France, their parents were mostly Gitanos, Spanish gipsies, who fled Catalonia during the 1930s’ Spanish Civil War. They are known for bringing Catalan rumba, a pop-oriented music distantly derived from traditional flamenco music, to worldwide audiences. Their music has been described as a place where “Spanish flamenco and gipsy rhapsody meet salsa funk”. There’s a full day of music and live entertainment from 3pm with the headliners on stage at 9pm. Tickets from BD15 are available from the club. Call 36 994-343 or 66 664-447.

Join in with celebrations for one of the most important dates in the Hindu calendar, the Festival of Colours. Organised by the Maharashtra Cultural Society (MCS) and taking place at the hotel’s poolside, the event will see participants doused in traditional coloured powders while enjoying various entertainment and food. The fun takes place from 10am-4pm and entry is BD1 for MCS members BD3 for non-members. Call 17 272-050.