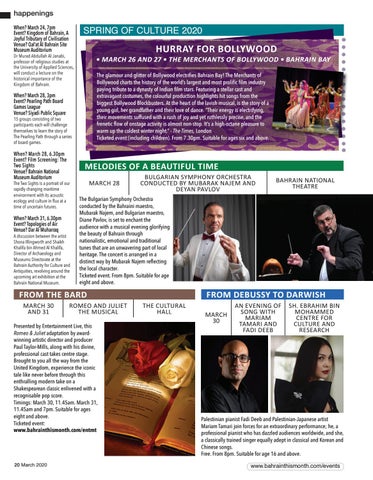 Dr Murad Abdullah Al Janabi, professor of religious studies at the University of Applied Sciences, will conduct a lecture on the historical importance of the Kingdom of Bahrain.

• MARCH 26 AND 27 • THE MERCHANTS OF BOLLYWOOD • BAHRAIN BAY The glamour and glitter of Bollywood electrifies Bahrain Bay! The Merchants of Bollywood charts the history of the world’s largest and most prolific film industry paying tribute to a dynasty of Indian film stars. Featuring a stellar cast and extravagant costumes, the colourful production highlights hit songs from the biggest Bollywood Blockbusters. At the heart of the lavish musical, is the story of a young girl, her grandfather and their love of dance. “Their energy is electrifying, their movements suffused with a rush of joy and yet ruthlessly precise, and the frenetic flow of onstage activity is almost non-stop. It’s a high-octane pleasure to warm up the coldest winter night.” - The Times, London Ticketed event (including children). From 7.30pm. Suitable for ages six and above.

15 groups consisting of two participants each will challenge themselves to learn the story of The Pearling Path through a series of board games.

MELODIES OF A BEAUTIFUL TIME

The Two Sights is a portrait of our rapidly changing maritime environment with its acoustic ecology and culture in flux at a time of uncertain futures.

A discussion between the artist Shona Illingworth and Shaikh Khalifa bin Ahmed Al Khalifa, Director of Archaeology and Museums Directorate at the Bahrain Authority for Culture and Antiquities, revolving around the upcoming art exhibition at the Bahrain National Museum.

The Bulgarian Symphony Orchestra conducted by the Bahraini maestro, Mubarak Najem, and Bulgarian maestro, Diane Pavlov, is set to enchant the audience with a musical evening glorifying the beauty of Bahrain through nationalistic, emotional and traditional tunes that are an unwavering part of local heritage. The concert is arranged in a distinct way by Mubarak Najem reflecting the local character. Ticketed event. From 8pm. Suitable for age eight and above.

ROMEO AND JULIET THE MUSICAL

Presented by Entertainment Live, this Romeo & Juliet adaptation by awardwinning artistic director and producer Paul Taylor-Mills, along with his divine, professional cast takes centre stage. Brought to you all the way from the United Kingdom, experience the iconic tale like never before through this enthralling modern take on a Shakespearean classic enlivened with a recognisable pop score. Timings: March 30, 11.45am. March 31, 11.45am and 7pm. Suitable for ages eight and above. Ticketed event: www.bahrainthismonth.com/entmt

FROM DEBUSSY TO DARWISH THE CULTURAL HALL

AN EVENING OF SONG WITH MARIAM TAMARI AND FADI DEEB

Palestinian pianist Fadi Deeb and Palestinian-Japanese artist Mariam Tamari join forces for an extraordinary performance; he, a professional pianist who has dazzled audiences worldwide, and she, a classically trained singer equally adept in classical and Korean and Chinese songs. Free. From 8pm. Suitable for age 16 and above. www.bahrainthismonth.com/events