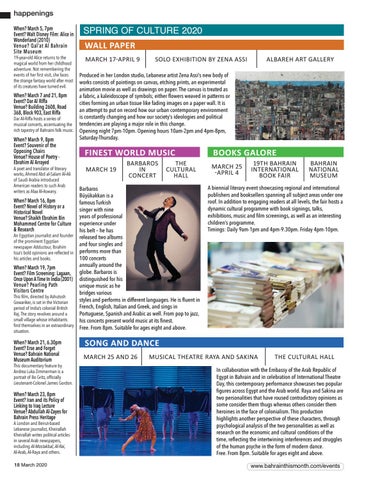 happenings When? March 5, 7pm Event? Walt Disney Film: Alice in Wonderland (2010) Venue? Qal’at Al Bahrain Site Museum 19-year-old Alice returns to the magical world from her childhood adventure. Not remembering the events of her first visit, she faces the strange fantasy world after most of its creatures have turned evil.

Produced in her London studio, Lebanese artist Zena Assi’s new body of works consists of paintings on canvas, etching prints, an experimental animation movie as well as drawings on paper. The canvas is treated as When? March 7 and 21, 8pm a fabric, a kaleidoscope of symbols; either flowers weaved in patterns or Event? Dar Al Riffa cities forming an urban tissue like fading images on a paper wall. It is Venue? Building 2608, Road an attempt to put on record how our urban contemporary environment 368, Block 903, East Riffa is constantly changing and how our society’s ideologies and political Dar Al-Riffa hosts a series of musical concerts, accentuating the tendencies are playing a major role in this change. rich tapestry of Bahraini folk music. Opening night 7pm-10pm. Opening hours 10am-2pm and 4pm-8pm, Saturday-Thursday. When? March 9, 8pm Event? Souvenir of the Opposing Chairs FINEST WORLD MUSIC BOOKS Venue? House of Poetry Ebrahim Al Arrayed BARBAROS THE A poet and translator of literary works, Ahmed Abd al-Salam Al-Ali of Saudi Arabia introduced American readers to such Arab writers as Alaa Al-Aswany.

Barbaros Büyükakkan is a When? March 16, 8pm famous Turkish Event? Novel of History or a singer with nine Historical Novel years of professional Venue? Shaikh Ebrahim Bin Mohammed Centre for Culture experience under & Research his belt – he has An Egyptian journalist and founder released two albums of the prominent Egyptian and four singles and newspaper Addustour, Ibrahim Issa’s bold opinions are reflected in performs more than 100 concerts his articles and books. annually around the When? March 19, 7pm Event? Film Screening: Lagaan, globe. Barbaros is Once Upon A Time In India (2001) distinguished for his Venue? Pearling Path unique music as he Visitors Centre bridges various This film, directed by Ashutosh styles and performs in different languages. He is fluent in Gowariker, is set in the Victorian French, English, Italian and Greek, and sings in period of India’s colonial British Raj. The story revolves around a Portuguese, Spanish and Arabic as well. From pop to jazz, small village whose inhabitants his concerts present world music at its finest. find themselves in an extraordinary Free. From 8pm. Suitable for ages eight and above.

A biennial literary event showcasing regional and international publishers and booksellers spanning all subject areas under one roof. In addition to engaging readers at all levels, the fair hosts a dynamic cultural programme with book signings, talks, exhibitions, music and film screenings, as well as an interesting children’s programme. Timings: Daily 9am-1pm and 4pm-9.30pm. Friday 4pm-10pm.

When? March 23, 8pm Event? Iran and its Policy of Linking to Iraq Lecture Venue? Abdullah Al-Zayes for Bahrain Press Heritage

In collaboration with the Embassy of the Arab Republic of Egypt in Bahrain and in celebration of International Theatre Day, this contemporary performance showcases two popular figures across Egypt and the Arab world. Raya and Sakina are two personalities that have roused contradictory opinions as some consider them thugs whereas others consider them heroines in the face of colonialism. This production highlights another perspective of these characters, through psychological analysis of the two personalities as well as research on the economic and cultural conditions of the time, reflecting the intertwining interferences and struggles of the human psyche in the form of modern dance. Free. From 8pm. Suitable for ages eight and above. www.bahrainthismonth.com/events