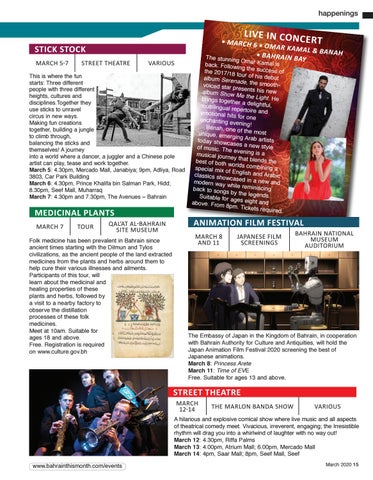 This is where the fun starts: Three different people with three different heights, cultures and disciplines.Together they use sticks to unravel circus in new ways. Making fun creations together, building a jungle to climb through, balancing the sticks and themselves! A journey into a world where a dancer, a juggler and a Chinese pole artist can play, tease and work together. March 5: 4.30pm, Mercado Mall, Janabiya; 9pm, Adliya, Road 3803, Car Park Building March 6: 4.30pm, Prince Khalifa bin Salman Park, Hidd; 8.30pm, Seef Mall, Muharraq March 7: 4.30pm and 7.30pm, The Avenues – Bahrain

Folk medicine has been prevalent in Bahrain since ancient times starting with the Dilmun and Tylos civilizations, as the ancient people of the land extracted medicines from the plants and herbs around them to help cure their various illnesses and ailments. Participants of this tour, will learn about the medicinal and healing properties of these plants and herbs, followed by a visit to a nearby factory to observe the distillation processes of these folk medicines. Meet at 10am. Suitable for ages 18 and above. Free. Registration is required on www.culture.gov.bh

The stunnin g Omar Kam al is back. Follow ing the succ ess of the 2017/18 tour of his d ebut album Seren ade, the sm oothvoiced star p resents his n ew album Show Me the Ligh t. He brings togeth er a delightf ul, multilingual repertoire an d emotional hits for one enchanting e vening! Banah, one of the most unique, eme rging Arab a rtists today showca ses a new st yle of music. Th e evening is a musical journ ey that blen ds the best of both worlds comb ining a special mix of English a nd Arabic classics sho wcased in a new and modern way while reminis cing back to song s by the lege nds. Suitable for ages eight a nd above. From 8pm. Tickets required.

The Embassy of Japan in the Kingdom of Bahrain, in cooperation with Bahrain Authority for Culture and Antiquities, will hold the Japan Animation Film Festival 2020 screening the best of Japanese animations. March 8: Princess Arete March 11: Time of EVE Free. Suitable for ages 13 and above.