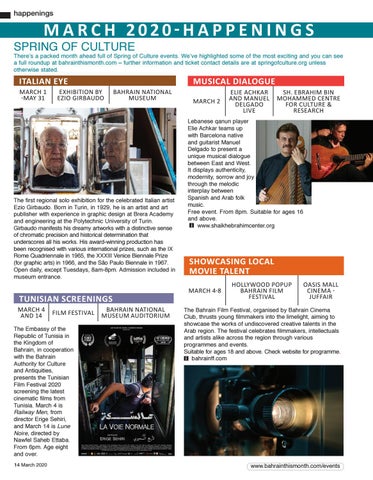 There’s a packed month ahead full of Spring of Culture events. We’ve highlighted some of the most exciting and you can see a full roundup at bahrainthismonth.com – further information and ticket contact details are at springofculture.org unless otherwise stated.

The first regional solo exhibition for the celebrated Italian artist Ezio Girbaudo. Born in Turin, in 1929, he is an artist and art publisher with experience in graphic design at Brera Academy and engineering at the Polytechnic University of Turin. Girbaudo manifests his dreamy artworks with a distinctive sense of chromatic precision and historical determination that underscores all his works. His award-winning production has been recognised with various international prizes, such as the IX Rome Quadriennale in 1965, the XXXIII Venice Biennale Prize (for graphic arts) in 1966, and the São Paulo Biennale in 1967. Open daily, except Tuesdays, 8am-8pm. Admission included in museum entrance.

The Embassy of the Republic of Tunisia in the Kingdom of Bahrain, in cooperation with the Bahrain Authority for Culture and Antiquities, presents the Tunisian Film Festival 2020 screening the latest cinematic films from Tunisia. March 4 is Railway Men, from director Erige Sehiri, and March 14 is Lune Noire, directed by Nawfel Saheb Ettaba. From 6pm. Age eight and over. 14 March 2020

Lebanese qanun player Elie Achkar teams up with Barcelona native and guitarist Manuel Delgado to present a unique musical dialogue between East and West. It displays authenticity, modernity, sorrow and joy through the melodic interplay between Spanish and Arab folk music. Free event. From 8pm. Suitable for ages 16 and above. www.shaikhebrahimcenter.org

The Bahrain Film Festival, organised by Bahrain Cinema Club, thrusts young filmmakers into the limelight, aiming to showcase the works of undiscovered creative talents in the Arab region. The festival celebrates filmmakers, intellectuals and artists alike across the region through various programmes and events. Suitable for ages 18 and above. Check website for programme. bahrainff.com