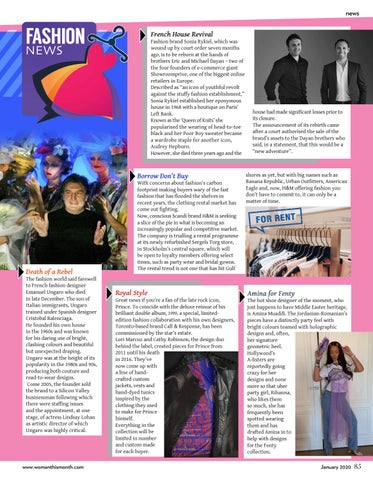 Fashion brand Sonia Rykiel, which was wound up by court order seven months ago, is to be reborn at the hands of brothers Eric and Michael Dayan – two of the four founders of e-commerce giant Showroomprive, one of the biggest online retailers in Europe. Described as “an icon of youthful revolt against the stuffy fashion establishment,” Sonia Rykiel established her eponymous house in 1968 with a boutique on Paris’ Left Bank. Known as the ‘Queen of Knits’ she popularised the wearing of head-to-toe black and her Poor Boy sweater became a wardrobe staple for another icon, Audrey Hepburn. However, she died three years ago and the

Death of a Rebel

The fashion world said farewell to French fashion designer Emanuel Ungaro who died in late December. The son of Italian immigrants, Ungaro trained under Spanish designer Cristobal Balenciaga. He founded his own house in the 1960s and was known for his daring use of bright, clashing colours and beautiful but unexpected draping. Ungaro was at the height of its popularity in the 1980s and 90s, producing both couture and read-to-wear designs. Come 2005, the founder sold the brand to a Silicon Valley businessman following which there were staffing issues and the appointment, at one stage, of actress Lindsay Lohan as artistic director of which Ungaro was highly critical.

With concerns about fashion’s carbon footprint making buyers wary of the fast fashion that has flooded the shelves in recent years, the clothing rental market has come out fighting. Now, conscious Scandi brand H&M is seeking a slice of the pie in what is becoming an increasingly popular and competitive market. The company is trialling a rental programme at its newly refurbished Sergels Torg store, in Stockholm’s central square, which will be open to loyalty members offering select items, such as party wear and bridal gowns. The rental trend is not one that has hit Gulf

Great news if you’re a fan of the late rock icon, Prince. To coincide with the deluxe reissue of his brilliant double album, 1999, a special, limitededition fashion collaboration with his own designers, Toronto-based brand Call & Response, has been commissioned by the star’s estate. Lori Marcuz and Cathy Robinson, the design duo behind the label, created pieces for Prince from 2011 until his death in 2016. They’ve now come up with a line of handcrafted custom jackets, vests and hand-dyed tunics inspired by the clothing they used to make for Prince himself. Everything in the collection will be limited in number and custom made for each buyer.

house had made significant losses prior to its closure. The announcement of its rebirth came after a court authorised the sale of the brand’s assets to the Dayan brothers who said, in a statement, that this would be a “new adventure”.

shores as yet, but with big names such as Banana Republic, Urban Outfitters, American Eagle and, now, H&M offering fashion you don’t have to commit to, it can only be a matter of time.

The hot shoe designer of the moment, who just happens to have Middle Easter heritage, is Amina Muaddi. The Jordanian-Romanian’s pieces have a distinctly party feel with bright colours teamed with holographic designs and, often, her signature geometric heel. Hollywood’s A-listers are reportedly going crazy for her designs and none more so that uber party girl, Rihanna, who likes them so much, she has frequently been spotted wearing them and has drafted Amina in to help with designs for the Fenty collection. January 2020