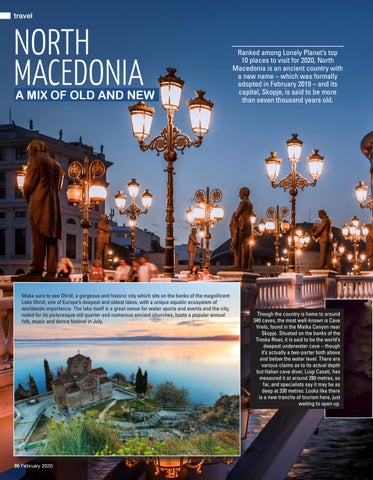 A MIX OF OLD AND NEW

Make sure to see Ohrid, a gorgeous and historic city which sits on the banks of the magnificent Lake Ohrid, one of Europe’s deepest and oldest lakes, with a unique aquatic ecosystem of worldwide importance. The lake itself is a great venue for water sports and events and the city, noted for its picturesque old quarter and numerous ancient churches, hosts a popular annual folk, music and dance festival in July.

Ranked among Lonely Planet’s top 10 places to visit for 2020, North Macedonia is an ancient country with a new name – which was formally adopted in February 2019 – and its capital, Skopje, is said to be more than seven thousand years old.

Though the country is home to around 340 caves, the most well-known is Cave Vrelo, found in the Matka Canyon near Skopje. Situated on the banks of the Treska River, it is said to be the world’s deepest underwater cave – though it’s actually a two-parter both above and below the water level. There are various claims as to its actual depth but Italian cave diver, Luigi Casati, has measured it at around 280 metres, so far, and specialists say it may be as deep at 330 metres. Looks like there is a new tranche of tourism here, just waiting to open up.