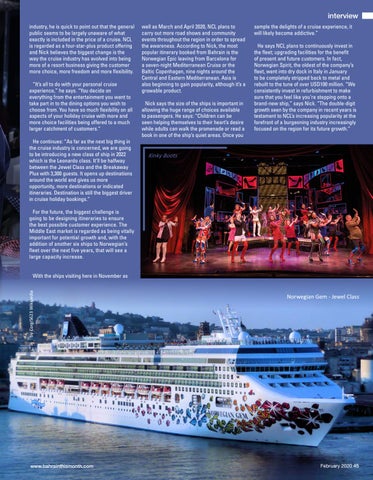 interview industry, he is quick to point out that the general public seems to be largely unaware of what exactly is included in the price of a cruise. NCL is regarded as a four-star-plus product offering and Nick believes the biggest change is the way the cruise industry has evolved into being more of a resort business giving the customer more choice, more freedom and more flexibility. “It’s all to do with your personal cruise experience,” he says. “You decide on everything from the entertainment you want to take part in to the dining options you wish to choose from. You have so much flexibility on all aspects of your holiday cruise with more and more choice facilities being offered to a much larger catchment of customers.” He continues: “As far as the next big thing in the cruise industry is concerned, we are going to be introducing a new class of ship in 2022 which is the Leonardo class. It’ll be halfway between the Jewel Class and the Breakaway Plus with 3,300 guests. It opens up destinations around the world and gives us more opportunity, more destinations or indicated itineraries. Destination is still the biggest driver in cruise holiday bookings.”

well as March and April 2020, NCL plans to carry out more road shows and community events throughout the region in order to spread the awareness. According to Nick, the most popular itinerary booked from Bahrain is the Norwegian Epic leaving from Barcelona for a seven-night Mediterranean Cruise or the Baltic Copenhagen, nine nights around the Central and Eastern Mediterranean. Asia is also beginning to gain popularity, although it’s a growable product. Nick says the size of the ships is important in allowing the huge range of choices available to passengers. He says: “Children can be seen helping themselves to their heart’s desire while adults can walk the promenade or read a book in one of the ship’s quiet areas. Once you

sample the delights of a cruise experience, it will likely become addictive.” He says NCL plans to continuously invest in the fleet; upgrading facilities for the benefit of present and future customers. In fact, Norwegian Spirit, the oldest of the company’s fleet, went into dry dock in Italy in January to be completely stripped back to metal and rebuilt to the tune of over USD100 million. “We consistently invest in refurbishment to make sure that you feel like you’re stepping onto a brand-new ship,” says Nick. “The double-digit growth seen by the company in recent years is testament to NCL’s increasing popularity at the forefront of a burgeoning industry increasingly focused on the region for its future growth.”

For the future, the biggest challenge is going to be designing itineraries to ensure the best possible customer experience. The Middle East market is regarded as being vitally important for potential growth and, with the addition of another six ships to Norwegian’s fleet over the next five years, that will see a large capacity increase.

With the ships visiting here in November as