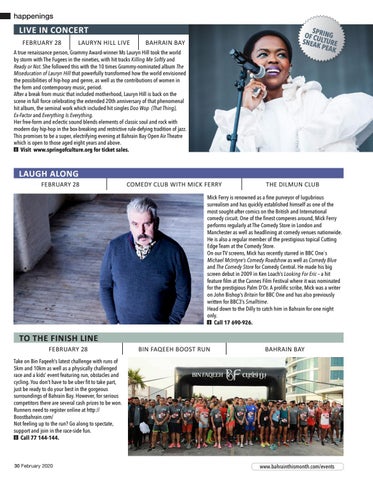 A true renaissance person, Grammy Award-winner Ms Lauryn Hill took the world by storm with The Fugees in the nineties, with hit tracks Killing Me Softly and Ready or Not. She followed this with the 10 times Grammy-nominated album The Miseducation of Lauryn Hill that powerfully transformed how the world envisioned the possibilities of hip-hop and genre, as well as the contributions of women in the form and contemporary music, period. After a break from music that included motherhood, Lauryn Hill is back on the scene in full force celebrating the extended 20th anniversary of that phenomenal hit album, the seminal work which included hit singles Doo Wop (That Thing), Ex-Factor and Everything Is Everything. Her free-form and eclectic sound blends elements of classic soul and rock with modern day hip-hop in the box-breaking and restrictive rule-defying tradition of jazz. This promises to be a super, electrifying evening at Bahrain Bay Open Air Theatre which is open to those aged eight years and above. Visit www.springofculture.org for ticket sales.

Mick Ferry is renowned as a fine purveyor of lugubrious surrealism and has quickly established himself as one of the most sought-after comics on the British and International comedy circuit. One of the finest comperes around, Mick Ferry performs regularly at The Comedy Store in London and Manchester as well as headlining at comedy venues nationwide. He is also a regular member of the prestigious topical Cutting Edge Team at the Comedy Store. On our TV screens, Mick has recently starred in BBC One`s Michael McIntyre’s Comedy Roadshow as well as Comedy Blue and The Comedy Store for Comedy Central. He made his big screen debut in 2009 in Ken Loach’s Looking For Eric – a hit feature film at the Cannes Film Festival where it was nominated for the prestigious Palm D’Or. A prolific scribe, Mick was a writer on John Bishop’s Britain for BBC One and has also previously written for BBC3’s Smalltime. Head down to the Dilly to catch him in Bahrain for one night only. Call 17 690-926.

TO THE FINISH LINE FEBRUARY 28

Take on Bin Faqeeh’s latest challenge with runs of 5km and 10km as well as a physically challenged race and a kids’ event featuring run, obstacles and cycling. You don’t have to be uber fit to take part, just be ready to do your best in the gorgeous surroundings of Bahrain Bay. However, for serious competitors there are several cash prizes to be won. Runners need to register online at http:// Boostbahrain.com/ Not feeling up to the run? Go along to spectate, support and join in the race-side fun. Call 77 144-144.