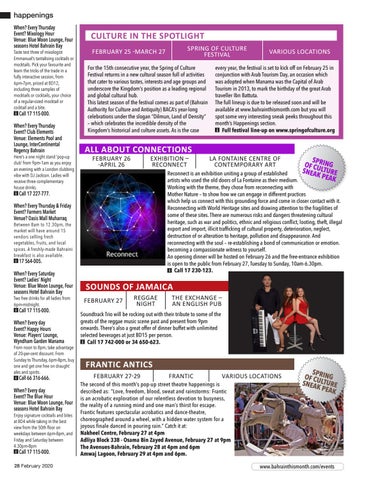 Taste test three of mixologist Emmanuel’s tantalising cocktails or mocktails. Pick your favourite and learn the tricks of the trade in a fully interactive session, from 6pm-7pm, priced at BD12, including three samples of mocktails or cocktails, your choice of a regular-sized mocktail or cocktail and a bite.

Here’s a one night stand ‘pop-up club’ from 9pm-1am as you enjoy an evening with a London clubbing vibe with DJ Jackson. Ladies will receive three complementary house drinks.

CULTURE IN THE SPOTLIGHT For the 15th consecutive year, the Spring of Culture Festival returns in a new cultural season full of activities that cater to various tastes, interests and age groups and underscore the Kingdom’s position as a leading regional and global cultural hub. This latest season of the festival comes as part of (Bahrain Authority for Culture and Antiquity) BACA’s year-long celebrations under the slogan “Dilmun, Land of Density” – which celebrates the incredible density of the Kingdom’s historical and culture assets. As is the case

ALL ABOUT CONNECTIONS FEBRUARY 26 -APRIL 26

Between 8am to 12.30pm, the market will have around 15 vendors selling fresh vegetables, fruits, and local spices. A freshly-made Bahraini breakfast is also available.

From noon to 8pm, take advantage of 20-per-cent discount. From Sunday to Thursday, 6pm-8pm, buy one and get one free on draught ales and spirits.

When? Every day Event? The Blue Hour Venue: Blue Moon Lounge, Four seasons Hotel Bahrain Bay Enjoy signature cocktails and bites at BD4 while taking in the best view from the 50th floor on weekdays between 6pm-8pm, and Friday and Saturday between 4.30pm-8pm

every year, the festival is set to kick off on February 25 in conjunction with Arab Tourism Day, an occasion which was adopted when Manama was the Capital of Arab Tourism in 2013, to mark the birthday of the great Arab traveller Ibn Battuta. The full lineup is due to be released soon and will be available at www.bahrainthismonth.com but you will spot some very interesting sneak peeks throughout this month’s Happenings section. Full festival line-up on www.springofculture.org

Working with the theme, they chose from reconnecting with Mother Nature – to show how we can engage in different practices which help us connect with this grounding force and come in closer contact with it. Reconnecting with World Heritage sites and drawing attention to the fragilities of some of these sites. There are numerous risks and dangers threatening cultural heritage, such as war and politics, ethnic and religious conflict, looting, theft, illegal export and import, illicit trafficking of cultural property, deterioration, neglect, destruction of or alteration to heritage, pollution and disappearance. And reconnecting with the soul – re-establishing a bond of communication or emotion. becoming a compassionate witness to yourself. An opening dinner will be hosted on February 26 and the free-entrance exhibition is open to the public from February 27, Tuesday to Sunday, 10am-6.30pm. Call 17 230-123.

Two free drinks for all ladies from 6pm-midnight.

SP OF CURING SNEA LTURE Reconnect is an exhibition uniting a group of established K PEA K artists who used the old doors of La Fontaine as their medium.

THE EXCHANGE – AN ENGLISH PUB

Soundtrack Trio will be rocking out with their tribute to some of the greats of the reggae music scene past and present from 9pm onwards. There’s also a great offer of dinner buffet with unlimited selected beverages at just BD15 per person. Call 17 742-000 or 34 650-623.

The second of this month’s pop-up street theatre happenings is described as: “Love, freedom, blood, sweat and rainstorms: Frantic is an acrobatic exploration of our relentless devotion to busyness, the reality of a running mind and one man’s thirst for escape. Frantic features spectacular acrobatics and dance-theatre, choreographed around a wheel, with a hidden water system for a joyous finale danced in pouring rain.” Catch it at: Nakheel Centre, February 27 at 4pm Adliya Block 338 - Osama Bin Zayed Avenue, February 27 at 9pm The Avenues-Bahrain, February 28 at 4pm and 6pm Amwaj Lagoon, February 29 at 4pm and 6pm.