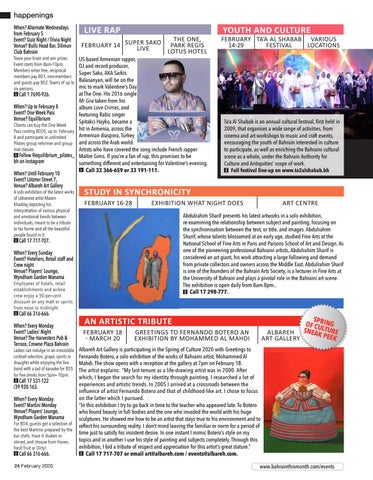 US-based Armenian rapper, DJ and record producer, Super Sako, AKA Sarkis Balasanyan, will be on the mic to mark Valentine’s Day at The One. His 2016 single Call 1 7690-926. Mi Gna taken from his When? Up to February 8 album Love Crimes, and Event? One Week Pass featuring Rabiz singer Venue? Equilibrium Spitakci Hayko, became a Clients can buy the One Week Pass costing BD20, up to February hit in Armenia, across the Armenian diaspora, Turkey 8 and participate in unlimited Pilates group reformer and group and across the Arab world. mat classes. Artists who have covered the song include French rapper Follow @equilibrium_pilates_ Maître Gims. If you’re a fan of rap, this promises to be bh on Instagram something different and entertaining for Valentine’s evening. Call 33 366-659 or 33 191-111. When? Until February 10 Event? Lützner Street 7, Venue? Albareh Art Gallery A solo exhibition of the latest works of Lebanese artist Mazen Khaddaj depicting his interpretation of various physical and emotional bonds between individuals, meant to be a tribute to his home and all the beautiful people found in it.

For BD4, guests get a selection of the best Martinis prepared by the bar chefs. Have it shaken or stirred, and choose from frozen, fresh fruit or Dirty!

Abdulrahim Sharif presents his latest artworks in a solo exhibition, re-examining the relationship between subject and painting, focusing on the synchronisation between the text, or title, and images. Abdulrahim Sharif, whose talents blossomed at an early age, studied Fine Arts at the National School of Fine Arts in Paris and Parsons School of Art and Design. As one of the pioneering professional Bahraini artists, Abdulrahim Sharif is considered an art giant, his work attracting a large following and demand from private collectors and owners across the Middle East. Abdulrahim Sharif is one of the founders of the Bahrain Arts Society, is a lecturer in Fine Arts at the University of Bahrain and plays a pivotal role in the Bahraini art scene. The exhibition is open daily from 8am-8pm.. Call 17 298-777.

Employees of hotels, retail establishments and airline crew enjoy a 50-per-cent discount on any malt or spirits from noon to midnight.

Ladies can indulge in an irresistible cocktail selection, grape, spirits or draughts while enjoying the live band with a tad of karaoke for BD5 for five drinks from 5pm– 10pm.

EXHIBITION WHAT NIGHT DOES

Ta’a Al Shabab is an annual cultural festival, first held in 2009, that organises a wide range of activities, from cinema and art workshops to music and craft events, encouraging the youth of Bahrain interested in culture to participate, as well as enriching the Bahraini cultural scene as a whole, under the Bahrain Authority for Culture and Antiquities’ scope of work.

GREETINGS TO FERNANDO BOTERO AN EXHIBITION BY MOHAMMED AL MAHDI

Albareh Art Gallery is participating in the Spring of Culture 2020 with Greetings to Fernando Botero, a solo exhibition of the works of Bahraini artist, Mohammed Al Mahdi. The show opens with a reception at the gallery at 7pm on February 18. The artist explains: “My last tenure as a life-drawing artist was in 2000. After which, I began the search for my identity through painting. I researched a lot of experiences and artistic trends. In 2005 I arrived at a crossroads between the influence of artist Fernando Botero and that of childhood-like art. I chose to focus on the latter which I pursued. “In this exhibition I try to go back in time to the teacher who appeared late. To Botero who found beauty in full bodies and the one who invaded the world with his huge sculptures. He showed me how to be an artist that stays true to his environment and to reflect his surrounding reality. I don’t mind leaving the familiar or norm for a period of time just to satisfy his insistent desire. In one instant I mimic Botero’s style on my topics and in another I use his style of painting and subjects completely. Through this exhibition, I bid a tribute of respect and appreciation for this artist’s great stature.” Call 17 717-707 or email art@albareh.com / events@albareh.com. www.bahrainthismonth.com/events