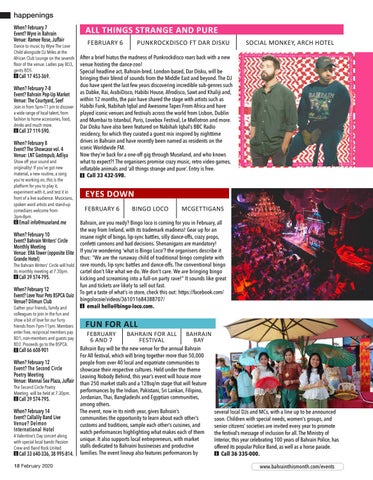 Dance to music by Wyre The Love Child alongside DJ Miles at the African Club Lounge on the seventh floor of the venue. Ladies pay BD3, gents BD5.

Join in from 5pm-11 pm to discover a wide range of local talent, from fashion to home accessories, food, drinks and much more.

Show off your sound and originality! If you’ve got new material, a new routine, a song you’re working on, this is the platform for you to play it, experiment with it, and test it in front of a live audience. Musicians, spoken word artists and stand-up comedians welcome from 3pm-8pm.

ALL THINGS STRANGE AND PURE FEBRUARY 6

After a brief hiatus the madness of Punkrockdisco roars back with a new venue hosting the dance-zoo! Special headline act, Bahrain-bred, London-based, Dar Disku, will be bringing their blend of sounds from the Middle East and beyond. The DJ duo have spent the last few years discovering incredible sub-genres such as Dabke, Rai, ArabiDisco, Habibi House, Afrodisco, Sawt and Khaliji and, within 12 months, the pair have shared the stage with artists such as Habibi Funk, Nabihah Iqbal and Awesome Tapes From Africa and have played iconic venues and festivals across the world from Lisbon, Dublin and Mumbai to Istanbul, Paris, Lovebox Festival, Le Mellotron and more. Dar Disku have also been featured on Nabihah Iqbal’s BBC Radio residency, for which they curated a guest mix inspired by nighttime drives in Bahrain and have recently been named as residents on the iconic Worldwide FM. Now they’re back for a one-off gig through Museland, and who knows what to expect?! The organisers promise crazy music, retro video games, inflatable animals and ‘all things strange and pure’. Entry is free. Call 33 432-598.

Bahrain, are you ready? Bingo loco is coming for you in February, all the way from Ireland, with its trademark madness! Gear up for an When? February 10 insane night of bingo, lip-sync battles, silly dance-offs, crazy props, Event? Bahrain Writers’ Circle confetti cannons and bad decisions. Shenanigans are mandatory! Monthly Meeting Venue: ERA Tower (opposite Elite If you’re wondering ‘what is Bingo Loco’? the organisers describe it thus: “We are the runaway child of traditional bingo complete with Grande Hotel) The Bahrain Writers’ Circle will hold rave rounds, lip-sync battles and dance-offs. The conventional bingo its monthly meeting at 7.30pm. cartel don’t like what we do. We don’t care. We are bringing bingo Call 39 574-795. kicking and screaming into a full-on party rave!” It sounds like great fun and tickets are likely to sell out fast. When? February 12 To get a taste of what’s in store, check this out: https://facebook.com/ Event? Love Your Pets BSPCA Quiz bingolocoie/videos/361011684388707/ Venue? Dilmun Club email hello@bingo-loco.com. Gather your friends, family and colleagues to join in the fun and show a bit of love for our furry friends from 7pm-11pm. Members enter free, reciprocal members pay BD1, non-members and guests pay BD2. Proceeds go to the BSPCA.

FUN FOR ALL FEBRUARY 6 AND 7

BAHRAIN FOR ALL FESTIVAL

Bahrain Bay will be the new venue for the annual Bahrain For All festival, which will bring together more than 50,000 people from over 40 local and expatriate communities to showcase their respective cultures. Held under the theme Leaving Nobody Behind, this year’s event will house more than 250 market stalls and a 128sq/m stage that will feature performances by the Indian, Pakistani, Sri Lankan, Filipino, Jordanian, Thai, Bangladeshi and Egyptian communities, among others. The event, now in its ninth year, gives Bahrain’s communities the opportunity to learn about each other’s customs and traditions, sample each other’s cuisines, and watch performances highlighting what makes each of them unique. It also supports local entrepreneurs, with market stalls dedicated to Bahraini businesses and productive families. The event lineup also features performances by

several local DJs and MCs, with a line up to be announced soon. Children with special needs, women’s groups, and senior citizens’ societies are invited every year to promote the festival’s message of inclusion for all. The Ministry of Interior, this year celebrating 100 years of Bahrain Police, has offered its popular Police Band, as well as a horse parade. Call 36 335-000. www.bahrainthismonth.com/events