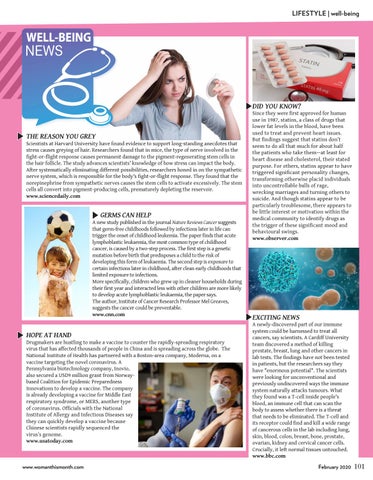 THE REASON YOU GREY

Scientists at Harvard University have found evidence to support long-standing anecdotes that stress causes greying of hair. Researchers found that in mice, the type of nerve involved in the fight-or-flight response causes permanent damage to the pigment-regenerating stem cells in the hair follicle. The study advances scientists' knowledge of how stress can impact the body. After systematically eliminating different possibilities, researchers honed in on the sympathetic nerve system, which is responsible for the body's fight-or-flight response. They found that the norepinephrine from sympathetic nerves causes the stem cells to activate excessively. The stem cells all convert into pigment-producing cells, prematurely depleting the reservoir. www.sciencedaily.com

A new study published in the journal Nature Reviews Cancer suggests that germ-free childhoods followed by infections later in life can trigger the onset of childhood leukemia. The paper finds that acute lymphoblastic leukaemia, the most common type of childhood cancer, is caused by a two-step process. The first step is a genetic mutation before birth that predisposes a child to the risk of developing this form of leukaemia. The second step is exposure to certain infections later in childhood, after clean early childhoods that limited exposure to infections. More specifically, children who grew up in cleaner households during their first year and interacted less with other children are more likely to develop acute lymphoblastic leukaemia, the paper says. The author, Institute of Cancer Research Professor Mel Greaves, suggests the cancer could be preventable. www.cnn.com

Drugmakers are hustling to make a vaccine to counter the rapidly-spreading respiratory virus that has affected thousands of people in China and is spreading across the globe.  The National Institute of Health has partnered with a Boston-area company, Moderna, on a vaccine targeting the novel coronavirus. A Pennsylvania biotechnology company, Inovio, also secured a USD9 million grant from Norwaybased Coalition for Epidemic Preparedness Innovations to develop a vaccine. The company is already developing a vaccine for Middle East respiratory syndrome, or MERS, another type of coronavirus. Officials with the National Institute of Allergy and Infectious Diseases say they can quickly develop a vaccine because Chinese scientists rapidly sequenced the virus’s genome.  www.usatoday.com

Since they were first approved for human use in 1987, statins, a class of drugs that lower fat levels in the blood, have been used to treat and prevent heart issues. But findings suggest that statins don’t seem to do all that much for about half the patients who take them—at least for heart disease and cholesterol, their stated purpose. For others, statins appear to have triggered significant personality changes, transforming otherwise placid individuals into uncontrollable balls of rage, wrecking marriages and turning others to suicide. And though statins appear to be particularly troublesome, there appears to be little interest or motivation within the medical community to identify drugs as the trigger of these significant mood and behavioural swings. www.observer.com

A newly-discovered part of our immune system could be harnessed to treat all cancers, say scientists. A Cardiff University team discovered a method of killing prostate, breast, lung and other cancers in lab tests. The findings have not been tested in patients, but the researchers say they have "enormous potential". The scientists were looking for unconventional and previously undiscovered ways the immune system naturally attacks tumours. What they found was a T-cell inside people's blood, an immune cell that can scan the body to assess whether there is a threat that needs to be eliminated. The T-cell and its receptor could find and kill a wide range of cancerous cells in the lab including lung, skin, blood, colon, breast, bone, prostate, ovarian, kidney and cervical cancer cells. Crucially, it left normal tissues untouched. www.bbc.com February 2020