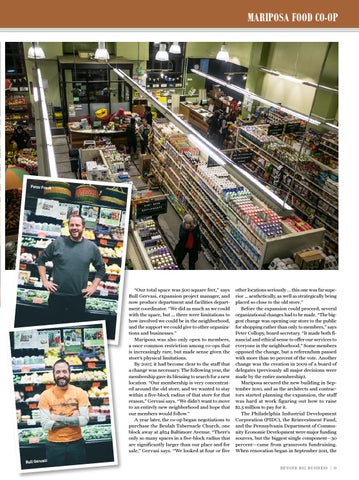 “Our total space was 500 square feet,” says Bull Gervasi, expansion project manager, and now produce department and facilities department coordinator. “We did as much as we could with the space, but … there were limitations to how involved we could be in the neighborhood, and the support we could give to other organizations and businesses.” Mariposa was also only open to members, a once common restriction among co-ops that is increasingly rare, but made sense given the store’s physical limitations. By 2007, it had become clear to the staff that a change was necessary. The following year, the membership gave its blessing to search for a new location. “Our membership is very concentrated around the old store, and we wanted to stay within a five-block radius of that store for that reason,” Gervasi says. “We didn’t want to move to an entirely new neighborhood and hope that our members would follow.” A year later, the co-op began negotiations to purchase the Beulah Tabernacle Church, one block away at 4824 Baltimore Avenue. “There’s only so many spaces in a five-block radius that are significantly larger than our place and for sale,” Gervasi says. “We looked at four or five

other locations seriously ... this one was far superior … aesthetically, as well as strategically being placed so close to the old store.” Before the expansion could proceed, several organizational changes had to be made. “The biggest change was opening our store to the public for shopping rather than only to members,” says Peter Collopy, board secretary. “It made both financial and ethical sense to offer our services to everyone in the neighborhood.” Some members opposed the change, but a referendum passed with more than 90 percent of the vote. Another change was the creation in 2009 of a board of delegates (previously all major decisions were made by the entire membership). Mariposa secured the new building in September 2010, and as the architects and contractors started planning the expansion, the staff was hard at work figuring out how to raise $2.5 million to pay for it. The Philadelphia Industrial Development Corporation (PIDC), the Reinvestment Fund, and the Pennsylvania Department of Community Economic Development were major funding sources, but the biggest single component—30 percent—came from grassroots fundraising. When renovation began in September 2011, the