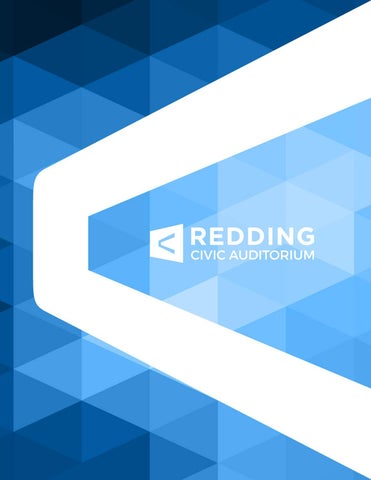 On behalf of everyone at Advance Redding and the Redding Civic Auditorium, we are excited to announce that the past year has been our best yet. In January of 2012, Advance Redding began managing the facility. Since then we have seen local events and ticketed shows growth every year. We are honored to manage the facility and keep it available for so many community events. The purpose of the following report is to help the community understand the business of The Civic. The public/private partnership has been very successful in many ways and has made it possible for over one million dollars to be invested into the facility throughout the last four years. This past year we added a variety of new community events and kicked off our first season of shows. Headlining the season was Blue Man Group which sold out our venue and ended up being one of our best shows ever! Big things are happening in the North State! We want to host the biggest names in entertainment and partner with the biggest community events to make this an incredible place to live and call home. We hope everyone finds something for themselves at the Civic and as we like to sayâ&amp;#x20AC;Ś Have More Fun!

COMPARED TO 13 IN 2010, THE YEAR BEFORE ADVANCE REDDING BEGAN MANAGING THE REDDING CIVIC AUDITORIUM.

In 2020, the Redding Civic Auditorium will celebrate its 50th birthday. The vision of the facility shows in its design because it can be transformed into many setups. This flexibility has served the community well for all these years, accommodating dinners of 900 and trade shows of 10,000.

These new shows come alongside a local lineup of events put on by some of the North State’s best organizations. We are honored to host and work with these groups!

Everyone in attendence enjoyed the iconic Beach Boys when they came to Redding January 24, 2015

OUR MISSION: TO MAKE THE REDDING CIVIC AUDITORIUM A SUSTAINABLE BUSINESS FOR PRESENTING ENTERTAINMENT THAT INSPIRES OUR COMMUNITY AND FACILITATES EVENTS THAT MAKE REDDING A GREAT PLACE TO LIVE.

ADVANCE REDDING IS BUILDING COMMUNITY PARTNERSHIPS Bringing quality programing to the North State takes team effort. This year we partnered with PBS/KIXE, Simpson University, and Haven Humane to bring incredible theater, classical music, and family entertainment to the community. These partners were also able to raise $5,000 and bring visibility to their organizations.

has been paid in rent to the City of Redding

in capital improvement projects completed by the City of Redding using proceeds from rent.

It is estimated that one third of our 100,000 patrons come from over an hour away. Thatâ&amp;#x20AC;&amp;#x2122;s over 30,000 people buying gas, eating at restaurants, or staying in hotels locally. These visitors stimulate the local economy with an estimated $6,000,000 annually.

THE OTHER SIDE OF ECONOMIC DEVELOPMENT The flow of dollars within the community is a critical part of the local economy. It is especially important that dollars flow to community groups that meet critical needs in our area.

THIS PAST YEAR, 13 LOCAL NON-PROFIT AND COMMUNITY ORGANIZATIONS RAISED OVER $650,000 AT THE REDDING CIVIC AUDITORIUM.

ADVANCE REDDING IS DEDICATED TO FACILITY REDEVELOPEMENT Nearly 50 years old, the Redding Civic Auditorium is in need of critical upgrades and maintenance. Advance Redding has made over $650,000 of capital improvements to the facility since 2012. SOME OF THESE INCLUDE: • Kitchen Remodel • Lower Lobby Permanent Walls • Auditorium Video Projectors • Concert Quality Sound System

The Redding Civic Repertory debuted with its production of Christmas Carol, A Love Story. December 19 &amp; 20, 2015

VENUE SPONSORS AND PARTNERS The national average reveals performing arts centers and convention centers bring in half of their operating revenue from rentals and ticket sales. This makes it important for the Redding Civic Auditorium to have strong community sponsors and partners. We are so thankful for the companies that have joined us to bring revitalization to the Redding Civic Auditorium.

WHERE ARE WE GOING? Advance Redding is building a strategic plan to sustain the Redding Civic Auditorium for the next 20 years.

ADVANCE REDDING IS DEDICATED TO SEEING REDDING AND THE CIVIC AUDITORIUM THRIVE. The Advance Redding Staff is a team of professionals who take risks in many ways to find out what The Civic is capable of. They have come from as far as Alaska and Australia to build an organization that can help our city rise.

In 2010 the City of Redding was struggling to sustain management of the Civic Auditorium. Over one million dollars a year was needed from the Transient Occupancy Tax to keep the facility operational. These funds were desperately needed for essential city services and there were plans to close the facility.

In 2012, a partnership was established between the City of Redding and Bethel Church to keep the Civic Auditorium open. Advance Redding (public benefit non-profit 501c3) was formed to manage the facility and fulfill the contract with the City. For four years, Advance Redding has exceeded expectations, improving the quality of the facility and growing its usage to new levels.

LETâ&amp;#x20AC;&amp;#x2122;S BUILD FOR THE FUTURE TODAY! There is a unique opportunity in the evolution of the Redding Civic Auditorium at this time. A strong tenant relationship with Bethel School has provided financial stability so that facility redevelopment and event programing can take center stage.

Because the operation of the Redding Civic Auditorium was so costly for the City, facility upgrades have not been the priority for many years. In 2020, the North State community will have the opportunity to celebrate 50 years of events at the Civic. Our hope is that by 2020 the condition of the building will be remodeled and upgraded to such a quality that it is ready to serve event and entertainment needs for many years to come.

COMMUNITY INITIATIVES As the current management company, one of the most important things we can do to strengthen the future of the Civic Auditorium is to build community support. The Civic is situated as an essential physical, cultural, and community gathering place in the City. We want to create opportunities for everyone to be involved!

COMMUNITY ADVISORY BOARD During our ‘16/‘17 season, we will be reaching out into the community and inviting leaders to join us in leading and promoting the Redding Civic Auditorium. We are looking for people who share our passion to move the facility forward and bring incredible entertainment to the North State!

CIVIC MEMBERSHIP We are building toward 250 Civic members over the next two years. There are a variety of levels and incentives for becoming a member. Join us by helping to build a dedicated audience community at the Civic.

VOLUNTEER HOSPITALITY PROGRAMS For many years, a dedicated team of volunteers has welcomed hundreds of thousands of people to see their first concert, watch a child’s first performance, or attend a high school graduation. We want to expand the volunteer program to involve more hospitality and provide information about the facility to boost customer experience and increase community connections.

YOUTH PROGRAMMING A critical part of a successful performing arts center includes dynamic programs for local youth. We are looking for community partners to help build the future programs for our young people. Our vision is that The Civic would be a place where young people are inspired and awakened to how big and bright their future is.

PRIVATE FUNDING A stable future for the Redding Civic Auditorium will not be possible without significant support from individuals, foundations, and corporations. It is estimated that $750,000 annually will be needed to augment rental and ticket income to stabilize the facility for the future. We currently bring in about $68,000 a year in sponsor revenue and have $50,000 pledged as matching funds for capital improvements.

Goals for the 2016/2017 Season • Secure $50,000 matching funds for capital improvements • Apply for five foundation grants • New venue sponsor for $25,000 • Secure a $30,000 donation or grant to build a youth/education program • Secure funding for public portion of capital projects and ongoing facility operation after 2021