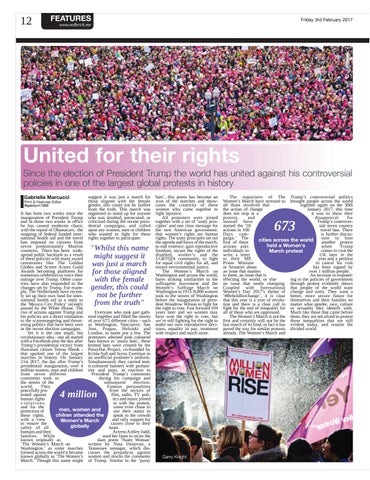 suggest it was just a march for those aligned with the female gender, this could not be further from the truth. This march was organised to stand up for anyone who was insulted, persecuted, or criticized during the recent presidential campaigns, and called upon any women, men or children who wanted to fight for these rights together to participate.

It has been two weeks since the inauguration of President Trump and in those two weeks in office he has caused moderate chaos; with the repeal of Obamacare, the stopping of federal funded international health aid and the travel ban imposed on citizens from seven predominantly Muslim countries. There has been widespread public backlash as a result of these policies with many award ceremonies like The Golden Globes and Screen Actors Guild Awards becoming platforms for numerous celebrities to voice their outrage over Trump. Other countries have also responded to the changes set by Trump. For example, The Netherlands have recently set up their own fund for international health aid as a reply to the 'Mexico City Policy' recently passed by the White House. The rise of actions against Trump and Everyone who took part gathhis policies are a direct retaliation ered together and filled the streets to the scaremongering and threat- of over 673 different cities - such ening politics that have been seen as Washington, Vancouver, San in the recent election campaigns. Jose, Prague, Helsinki and Yet it is the one small, but London, to name just a few. The revolutionary idea - one all started protesters adorned pink coloured with a Facebook plea the day after hats known as ‘pussy hats’, these Trump’s presidential victory from knitted hats were created by the Hawaiian citizen Teresa Shook - PussyHat Project, co-founded by that sparked one of the largest Krista-Suh and Jayna Zweiman as marches in history. On January an unofficial protester’s uniform. 21st 2017, the day after Trump’s Simultaneously they carried mulpresidential inauguration, over 4 ti-coloured banners with profanimillion women, men and children ties and puns, in reaction to from seven different President Trump’s comments continents took to during his campaign and the streets of the subsequent election. world. They Famous personalities peacefully profrom the sectors of tested against film, radio, TV polihuman rights tics and music joined violations in with the protest, and for the some even chose to men, women and protection of use their status to chilren attended the these rights, speak to the crowds with a view and rally support for Women's March to ensure the causes close to their globally safety of all heart. humans and their Actress Ashley Judd, families. While used her fame to recite the known originally as slam poem ‘Nasty Woman’ ‘The Women’s March on written by Nina Donovan, a Washington,’ as sister marches Tennessee teenager, which disformed across the world it became cusses the prejudices against known globally as ‘The Women’s women and mocks the comments March.’ Though this name might of Trump. Similar to the ‘pussy

"Whilst this name might suggest it was just a march for those aligned with the female gender, this could not be further from the truth"

hats’, this poem has become an icon of the marches and showcases the creativity of these women who came together to fight injustice. All protesters were joined together with a set of ‘unity principles’ and one clear message for the new American government: that women’s rights are human rights. The unity principles set out the agenda and focus of the march; to end violence, gain reproductive freedom, secure the rights of the disabled, worker’s and the LGBTQIA community, to fight for equal civil rights for all, and ensure environmental justice. The Women’s March on Washington and across the world, bares striking similarities to the suffragette movement and the Women’s Suffrage March on Washington in 1913. 8,000 women took to the streets of Washington before the inauguration of president Woodrow Wilson to fight for the right to vote. Fast forward 104 years later and we women may have won the right to vote, but we’re still fighting for the right to make our own reproductive decisions, equality in pay, treatment with respect and much more.

The organisers of The Trump’s controversial politics Women’s March have stressed to brought people across the world all those involved that together again on the 30th the action of change January 2017, this time does not stop at a it was to show their protest, and disapproval for instead have Trump’s controverstarted the '10 sial seven country actions in 100 travel ban. There Days camis further discuspaign.’ The sion to host cities across the world first of these another protest held a Women's actions asks when Trump individuals to comes to visit the March protest write a letter UK later in the to their MP, year and a petition Prime Minister to cancel his visit or Senators about has been signed by an issue that matters over 1 million people. to them, an issue that is An increase in respondeffecting the world, or else ing to the policies of government an issue that needs changing. through protest evidently shows Coupled with International that people of the world want Women’s Day 2017’s theme of change and unity. They want a ‘#Beboldforchange’, it is clear better, more secure future for that this year is a year of revolu- themselves and their families no tion and there is a clear call to matter what gender, race, culture fight for the end of inequality for or sexuality they identify with. all of those who are oppressed. Much like those that came before The Women’s March is not the them, they are not afraid to protest first and certainly will not be the these inequalities that are still last march of its kind, in fact it has evident today, and reunite the paved the way for similar protests divided world. already. The Women’s March and 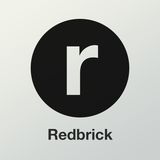