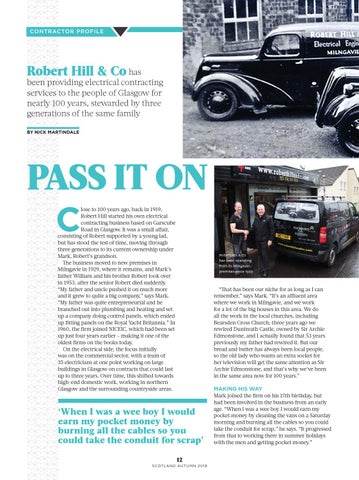 Robert Hill & Co has been providing electrical contracting services to the people of Glasgow for nearly 100 years, stewarded by three generations of the same family BY NICK MARTINDALE

PASS IT ON C lose to 100 years ago, back in 1919, Robert Hill started his own electrical contracting business based on Garscube Road in Glasgow. It was a small aﬀair, consisting of Robert supported by a young lad, but has stood the test of time, moving through three generations to its current ownership under Mark, Robert’s grandson. The business moved to new premises in Milngavie in 1929, where it remains, and Mark’s father William and his brother Robert took over in 1953, after the senior Robert died suddenly. “My father and uncle pushed it on much more and it grew to quite a big company,” says Mark. “My father was quite entrepreneurial and he branched out into plumbing and heating and set up a company doing control panels, which ended up ﬁtting panels on the Royal Yacht Britannia.” In 1960, the ﬁrm joined NICEIC, which had been set up just four years earlier – making it one of the oldest ﬁrms on the books today. On the electrical side, the focus initially was on the commercial sector, with a team of 35 electricians at one point working on large buildings in Glasgow on contracts that could last up to three years. Over time, this shifted towards high-end domestic work, working in northern Glasgow and the surrounding countryside areas.

“That has been our niche for as long as I can remember,” says Mark. “It’s an aﬄuent area where we work in Milngavie, and we work for a lot of the big houses in this area. We do all the work in the local churches, including Bearsden Cross Church; three years ago we rewired Duntreath Castle, owned by Sir Archie Edmonstone, and I actually found that 53 years previously my father had rewired it. But our bread and butter has always been local people, so the old lady who wants an extra socket for her television will get the same attention as Sir Archie Edmonstone, and that’s why we’ve been in the same area now for 100 years.”

MAKING HIS WAY Mark joined the ﬁrm on his 17th birthday, but had been involved in the business from an early age. “When I was a wee boy I would earn my pocket money by cleaning the vans on a Saturday morning and burning all the cables so you could take the conduit for scrap,” he says. “It progressed from that to working there in summer holidays with the men and getting pocket money.”