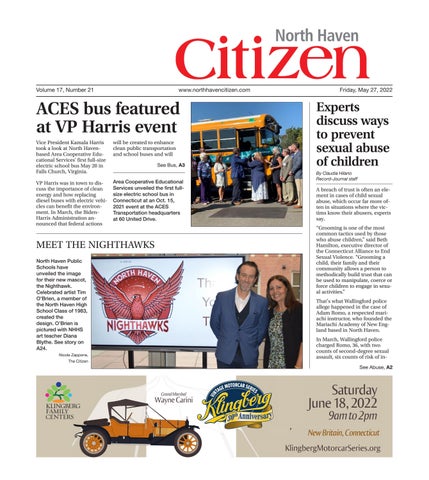 VP Harris was in town to discuss the importance of clean energy and how replacing diesel buses with electric vehicles can benefit the environment. In March, the BidenHarris Administration announced that federal actions

A breach of trust is often an element in cases of child sexual abuse, which occur far more often in situations where the victims know their abusers, experts say. “Grooming is one of the most common tactics used by those who abuse children,” said Beth Hamilton, executive director of the Connecticut Alliance to End Sexual Violence. “Grooming a child, their family and their community allows a person to methodically build trust that can be used to manipulate, coerce or force children to engage in sexual activities.”

MEET THE NIGHTHAWKS North Haven Public Schools have unveiled the image for their new mascot, the Nighthawk. Celebrated artist Tim O’Brien, a member of the North Haven High School Class of 1983, created the design. O’Brien is pictured with NHHS art teacher Diana Blythe. See story on A24.

That’s what Wallingford police allege happened in the case of Adam Romo, a respected mariachi instructor, who founded the Mariachi Academy of New England based in North Haven. In March, Wallingford police charged Romo, 36, with two counts of second-degree sexual assault, six counts of risk of in- 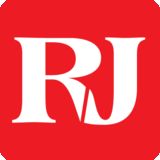