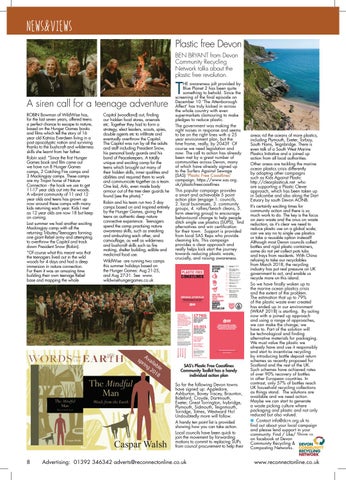 A siren call for a teenage adventure ROBIN Bowman of WildWise has, for the last seven years, offered teens a perfect chance to escape to nature, based on the Hunger Games books and films which tell the story of 16 year old Katniss Everdeen living in a post apocalyptic nation and surviving thanks to the bushcraft and wilderness skills she learnt from her father. Robin said: “Since the first Hunger Games book and film came out we have run 8 Hunger Games camps, 2 Catching Fire camps and 3 Mockingjay camps. These camps are my Trojan horse of Nature Connection - the hook we use to get 11-17 year olds out into the woods. A vibrant community of 11 and 12 year olds and teens has grown up now around these camps with many kids returning each year. Kids I met as 12 year olds are now 18 but keep on coming. Last summer we had another exciting Mockingjay camp with all the returning Tributes/Teenagers forming one giant Rebel army and attempting to overthrow the Capitol and track down President Snow (Robin). “Of course what this meant was that the teenagers lived out in the wild woods for 4 days and had a deep immersion in nature connection. For them it was an amazing time building their own teenage Rebel base and mapping the whole

Capitol (woodland) out, finding our hidden food stores, arsenals etc. Together they had to form a strategy, elect leaders, scouts, spies, double agents etc to infiltrate and eventually overthrow the Capitol. The Capitol was run by all the adults and staff including President Snow, his personal body guards and his band of Peacekeepers. A totally unique and exciting camp for the teens which brought out many of their hidden skills, inner qualities and abilities and required them to work and communicate together as a team. One lad, Arlo, even made body armour out of the tree deer guards he found (see the photo).” Robin and his team run two 5 day camps based on and inspired entirely by the Hunger Games, giving the teens an authentic deep nature connective experience. Teenagers spend the camp practising nature awareness skills, such as sneaking and ambushing each other, and camouflage, as well as wilderness and bushcraft skills such as fire making, shelter building, edible and medicinal food use. WildWise are running two camps this summer holidays based on the Hunger Games: Aug 21-25, and Aug 27-31. See www. wildwisehungergames.co.uk

HE awareness jolt provided by Blue Planet 2 has been quite something to behold. Since the screening of the final episode on December 10 ‘The Attenborough Affect’ has truly kicked in across the whole country with even supermarkets clamouring to make pledges to reduce plastic. The government was making the right noises in response and seems to be on the right lines with a 25 year environment plan, but the time frame, really, by 2043? Of course we need legislation and now. The call to action has already been met by a great number of communities across Devon, many of which have already signed up to the Surfers Against Sewage (SAS) ‘Plastic Free Coastlines’ campaign: https://www.sas.org. uk/plasticfreecoastlines This popular campaign provides a smart and achievable 5 point action plan (engage 1. councils, 2. local businesses, 3. community groups, 4. rallies/beach cleans, 5. form steering group) to encourage behavioural change to help people ditch single use plastics (SUPS), find alternatives and win certification for their town. Support is provided from local SAS Reps who provide cleaning kits. This campaign provides a clear approach and really helps kick start the journey towards reducing plastic waste, crucially, and raising awareness.

areas rid the oceans of more plastics, including Plymouth, Exeter, Torbay, South Hams, Teignbridge. There is even talk of a South West Marine Plastics Initiative and a joined up action from all local authorities. Other areas are tackling the marine ocean plastics crisis differently by adopting other campaigns such as Kids Against Plastic http://clearplasticuk.net who are supporting a Plastic Clever approach, which has been taken up in Salcombe and also along the Dart Estuary by south Devon AONB. It’s certainly exciting times for community action and there is so much work to do. The key is the focus on zero waste and the onus on waste reduction, as it’s clear we need to reduce plastic use on a global scale; can we say no to single use plastics or take a reusable option instead? Although most Devon councils collect bottles and rigid plastic containers, some do not yet collect pots tubs and trays from residents. With China refusing to take our recyclables from March 2018, the recycling industry has put real pressure on UK government to act, and enable us recycle more on this island. So we have finally woken up to the marine ocean plastics crisis and the extent of the problem. The estimation that up to 79% of the plastic waste ever created has ended up in our environment (WRAP 2018) is startling. By acting now with a joined up approach and using a range of approaches, we can make the change; we have to. Part of the solution will be technological and finding alternative materials for packaging. We must value the plastic we already have and use it responsibly and start to incentivise recycling by introducing bottle deposit return schemes as recently proposed for Scotland and the rest of the UK. Such schemes have achieved rates of over 90% recovery of bottles in other European countries. In contrast, only 57% of bottles reach UK household recycling collections as things stand. The solutions are available and we need action. Maybe we can start to generate a waste picking culture where packaging and plastic and not only reduced but also valued. l Contact info@dcrn.org.uk to find out about your local campaign and please lend support in your community. Find / Like/ Share us on facebook at Devon Community Recycling & Composting Networks.