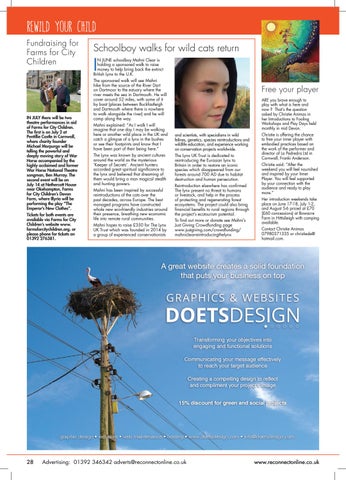 rewild your child Fundraising for Farms for City Children

IN JULY there will be two theatre performances in aid of Farms for City Children. The first is on July 2 at Pentillie Castle in Cornwall, where charity founder Michael Morpurgo will be telling the powerful and deeply moving story of War Horse accompanied by the highly acclaimed and former War Horse National Theatre songman, Ben Murray. The second event will be on July 14 at Nethercott House near Okehampton, Farms for City Children’s Devon Farm, where Illyria will be performing the play “The Emperor’s New Clothes”. Tickets for both events are available via Farms for City Children’s website www. farmsforcitychildren.org. or please phone for tickets on 01392 276381.

N JUNE schoolboy Mahni Clear is holding a sponsored walk to raise money to help bring back the extinct British Lynx to the U.K. The sponsored walk will see Mahni hike from the source of the River Dart on Dartmoor to the estuary where the river meets the sea in Dartmouth. He will cover around 52 miles, with some of it by boat (places between Buckfastleigh and Dartmouth where there is nowhere to walk alongside the river) and he will camp along the way. Mahni explained: “As I walk I will imagine that one day I may be walking here or another wild place in the UK and catch a glimpse of a lynx in the bushes or see their footprints and know that I have been part of their being here.” The Lynx was known by ancient cultures around the world as the mysterious ‘Keeper of Secrets’. Ancient hunters accorded great spiritual significance to the lynx and believed that dreaming of them would bring a man magical stealth and hunting powers. Mahni has been inspired by successful reintroductions of the cats over the past decades, across Europe. The best managed programs have constructed whole new eco-friendly industries around their presence, breathing new economic life into remote rural communities. Mahni hopes to raise £350 for The Lynx UK Trust which was founded in 2014 by a group of experienced conservationists

and scientists, with specialisms in wild felines, genetics, species reintroductions and wildlife education, and experience working on conservation projects worldwide. The Lynx UK Trust is dedicated to reintroducing the Eurasian lynx to Britain in order to restore an iconic species which disappeared from our forests around 700 AD due to habitat destruction and human persecution. Reintroduction elsewhere has confirmed The lynx present no threat to humans or livestock, and help in the process of protecting and regenerating forest ecosystems. The project could also bring financial benefits to rural regions through the project’s ecotourism potential. To find out more or donate see Mahni’s Just Giving Crowdfunding page www.justgiving.com/crowdfunding/ mahniclearreintroducingthelynx

ARE you brave enough to play with what is here and now ? That’s the question asked by Christie Animas in her Introductions to Fooling Workshops and Play Days held monthly in mid Devon. Christie is offering the chance to free your inner player with embodied practices based on the work of the performer and director of La Pedredra Ltd in Cornwall, Franki Anderson. Christie said: “After the weekend you will feel nourished and inspired by your Inner Player. You will feel supported by your connection with the audience and ready to play more.” Her introduction weekends take place on June 17-18, July 1-2, and August 5-6 priced at £70 (£60 concessions) at Bowacre Farm in Hittislieigh with camping available. Contact Christie Animas 07980371335 or christiede@ hotmail.com.