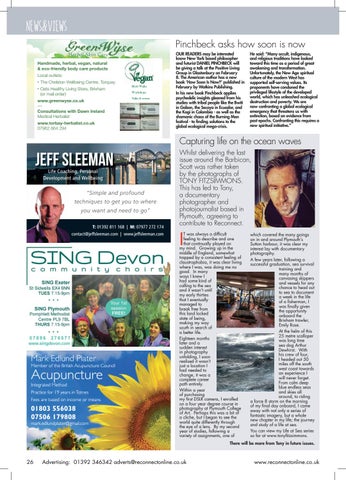 NEWS&views Pinchbeck asks how soon is now OUR READERS may be interested know New York based philosopher and futurist DANIEL PINCHBECK will be giving a talk at the Positive Living Group in Glastonbury on February 8. The American author has a new book ‘How Soon Is Now?’ published in February by Watkins Publishing. In his new book Pinchbeck applies psychedelic insights gleaned from his studies with tribal people like the Bwiti in Gabon, the Secoya in Ecuador, and the Kogi in Colombia - as well as the shamanic chaos of the Burning Man festival - to finding solutions to the global ecological mega-crisis.

He said: “Many occult, indigenous, and religious traditions have looked toward this time as a period of great awakening and transformation. Unfortunately, the New Age spiritual culture of the modern West has supported self-serving values. Its proponents have condoned the privileged lifestyle of the developed world, which has unleashed ecological destruction and poverty. We are now confronting a global ecological emergency that threatens us with extinction, based on evidence from past epochs. Confronting this requires a new spiritual initiative.”

Capturing life on the ocean waves

Member of the British Acupuncture Council

Whilst delivering the last issue around the Barbican, Scott was rather taken by the photographs of TONY FiTZSimmONS. This has led to Tony, a documentary photographer and photojournalist based in Plymouth, agreeing to contribute to Reconnect.

T was always a difficult feeling to describe and one that continually played on my mind. Growing up in the middle of England, somewhat trapped by a consistent feeling of claustrophobia, it was clear living where I was, was doing me no good. In many ways I knew I had some kind of calling to the sea and it wasn’t until my early thirties that I eventually managed to break free from this land locked state of being, making my way south in search of a better life. Eighteen months later and a sudden interest in photography unfolding, I soon realised it wasn’t just a location I had needed to change, it was a complete career path entirely. Within a year of purchasing my first DSLR camera, I enrolled on a four year degree course in photography at Plymouth College of Art. Perhaps this was a bit of a cliche, but I began to see the world quite differently through the eye of a lens. By my second year of studies, following a variety of assignments, one of

which covered the many goings on in and around Plymouth’s Sutton harbour, it was clear my interest lay with documentary photography. A few years later, following a successful graduation, sea survival training and many months of canvasing skippers and vessels for any chance to head out to sea to document a week in the life of a fisherman, I was finally given the opportunity onboard the Brixham trawler, Emily Rose. At the helm of this 25 metre scalloper was long time sea dog Arthur Dewhirst. With his crew of four, I headed out 50 miles off the south west coast towards an experience I will never forget. From calm deep blue endless seas and skies all around, to riding a force 8 storm on the morning of my final day onboard, I came away with not only a series of fantastic imagery, but a whole new chapter in my life; the journey and study of a life at sea. You can view my Life at Sea series so far at www.tonyfitzsimmons.

There will be more from Tony in future issues.