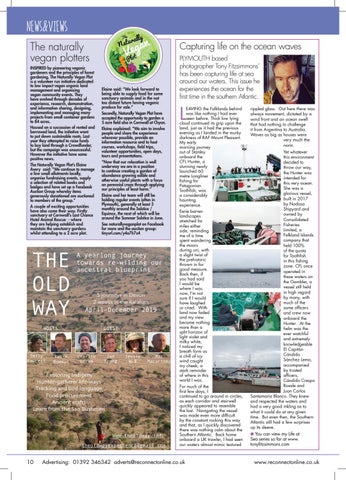 Capturing life on the ocean waves

INSPIRED by pioneering veganic gardeners and the principles of forest gardening, The Naturally Vegan Plot is a volunteer run initiative dedicated to low impact vegan organic land management and organising vegan community events. They have evolved through decades of experience, research, demonstration, and information sharing, designing, implementing and managing many projects from small container gardens to 84 acres. Housed on a succession of rented and borrowed land, the initiative want to put down sustainable roots. Last year they attempted to raise funds to buy land through a Crowdfunder, but the campaign was unsuccessful. However the initiative have some positive news. The Naturally Vegan Plot’s Elaine Avery said: “We continue to manage a few small allotments locally, organise fundraising events, supply a selection of related books and badges and have set up a Facebook Auction Group whereby items generously donationed are auctioned to members of the group.” A couple of exciting opportunities have also come their way. Firstly sanctuary at Cornwall’s Last Chance Hotel Animal Rescue - where they are helping establish and maintain the sanctuary gardens whilst attending to a 2 acre plot.

A yearlong journey towards re-wilding our ancestral blueprint

5 journeys in Devon 2 weeks in the Kalahari

Elaine said: “We look forward to being able to supply food for some sanctuary animals and in the not too distant future having veganic produce for sale.” Secondly, Naturally Vegan Plot have accepted the opportunity to garden a 5 acre field also in Cornwall at Chyan. Elaine explained: “We aim to involve people and share the experience wherever possible, provide an information resource and to host courses, workshops, field trips, volunteer opportunities, open days, tours and presentations. “Now that our relocation is well underway we are in a position to continue creating a garden of abundance growing edible and otherwise useful plants with a focus on perennial crops through applying our principles of least harm.” Elaine and her team will still be holding regular events (often in Plymouth), generally at least 3 monthly around the Solstice / Equinox, the next of which will be around the Summer Solstice in June. See naturallyveganplot on Facebook for more and the auction group: tinyurl.com/y4o7h7z4

PLYMOUTH based photographer Tony Fitzsimmons’ has been capturing life at sea around our waters. This issue he experiences the ocean for the first time in the southern Atlantic.

EAVING the Falklands behind was like nothing I had ever seen before. Thick low lying cloud continued its grip upon the land, just as it had the previous evening as I landed in the murky darkness of RAF Mount Pleasant. My early morning journey out of Stanley onboard the CFL Hunter, a stunning newly launched 60 metre Longliner fishing for Patagonian Toothfish, was a considerably haunting experience. Eerie barren landscapes stretched for miles either side, reminding me of a time spent wandering the moors during uni, with a slight twist of the prehistoric thrown in for good measure. Back then, if you had said I would be where I was now, I’m not sure if I would have laughed or cried. With land now faded and my view became nothing more than a split horizon of light violet and milky white, I noticed my breath form as a chill of icy wind caught my cheek; a stark reminder of where in this world I was. For much of the first few days, I continued to go around in circles, as each corridor and stairwell quickly appeared to resemble the last. Navigating the vessel was made even more difficult by the constant rocking this way and that, as I quickly discovered there was nothing calm about the Southern Atlantic. Back home onboard a UK trawler, I had seen our waters almost mimic textured

rippled glass. Out here there was always movement, dictated by a wind front and an ocean swell that had nothing to challenge it from Argentina to Australia. Waves as big as houses were very much the norm. Yet whatever this environment decided to throw our way, the Hunter was intended for this very ocean. She was a glorious vessel, built in 2017 by Nodosa Shipyard and owned by Consolidated Fisheries Limited, a Falkland Islands company that held 100% of the quota for Toothfish in this fishing zone. CFL once operated in these waters on the Gambler, a vessel still held in high regard by many, with much of the same officers and crew now onboard the Hunter. At the helm was the ever watchful and extremely knowledgeable El Capitán Cándido Sánchez Lema, accompanied by trusted officers, Cándido Crespo Rosale and Juan Carlos Santamaria Blanco. They knew and respected the waters and had a very good inkling as to what it could do at any given time. But even then, the Southern Atlantic still had a few surprises up its sleeve. l You can view my Life at Sea series so far at www. tonyfitzsimmons.com