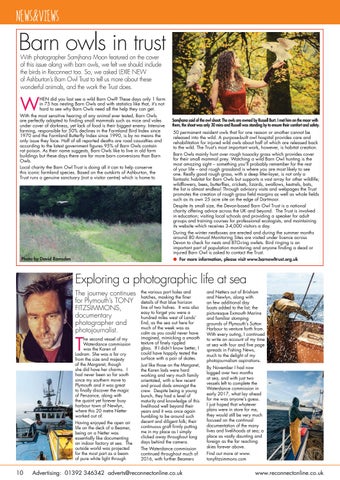 Barn owls in trust With photographer Samjhana Moon featured on the cover of this issue along with barn owls, we felt we should include the birds in Reconnect too. So, we asked LEXIE NEW of Ashburton’s Barn Owl Trust to tell us more about these wonderful animals, and the work the Trust does.

HEN did you last see a wild Barn Owl? These days only 1 farm in 75 has nesting Barn Owls and with statistics like that, it’s not hard to see why Barn Owls need all the help they can get. With the most sensitive hearing of any animal ever tested, Barn Owls are perfectly adapted to finding small mammals such as mice and voles under cover of darkness, yet lack of food is their biggest enemy. Intensive farming, responsible for 50% declines in the Farmland Bird Index since 1970 and the Farmland Butterfly Index since 1990, is by no means the only issue they face. Half of all reported deaths are road casualties and according to the latest government figures 95% of Barn Owls contain rat poison. As their name suggests, Barn Owls like to live in old farm buildings but these days there are far more barn conversions than Barn Owls. Local charity the Barn Owl Trust is doing all it can to help conserve this iconic farmland species. Based on the outskirts of Ashburton, the Trust runs a genuine sanctuary (not a visitor centre) which is home to

Samjhana said of the owl shoot: The owls are owned by Russell Burt. I met him on the moor with them, the shoot was only 30 mins and Russell was standing by to ensure their comfort and safety. 50 permanent resident owls that for one reason or another cannot be released into the wild. A purpose-built owl hospital provides care and rehabilitation for injured wild owls about half of which are released back to the wild. The Trust’s most important work, however, is habitat creation. Barn Owls mainly hunt over rough tussocky grass which provides cover for their small mammal prey. Watching a wild Barn Owl hunting is the most amazing sight – something you’ll probably remember for the rest of your life – and rough grassland is where you are most likely to see one. Really good rough grass, with a deep litter-layer, is not only a fantastic habitat for Barn Owls but supports a vast array for other wildlife; wildflowers, bees, butterflies, crickets, lizards, swallows, kestrels, bats, the list is almost endless! Through advisory visits and webpages the Trust promotes the creation of rough grass field margins as well as whole fields such as its own 25 acre site on the edge of Dartmoor. Despite its small size, the Devon-based Barn Owl Trust is a national charity offering advice across the UK and beyond. The Trust is involved in education; visiting local schools and providing a speaker for adult groups and training courses for professional ecologists, and maintaining its website which receives 3-4,000 visitors a day. During the winter nestboxes are erected and during the summer months around 80 Annual Monitoring Sites are visited under licence across Devon to check for nests and BTO-ring owlets. Bird ringing is an important part of population monitoring and anyone finding a dead or injured Barn Owl is asked to contact the Trust. l For more information, please visit www.barnowltrust.org.uk

he second vessel of my Waterdance commission was the Karen of Ladram. She was a far cry from the size and majesty of the Margaret, though she did have her charms. I had never been so far south since my southern move to Plymouth and it was great to finally discover the magic of Penzance, along with the quaint yet forever busy harbour town of Newlyn, where this 20 metre Netter worked out of. Having enjoyed the open air life on the deck of a Beamer, being on a Netter was essentially like documenting an indoor factory at sea. The outside world was projected for the most part as a beam of pure white light through

the various port holes and hatches, masking the finer details of that blue horizon line of two halves. It was also easy to forget you were a hundred miles west of Lands’ End, as the sea out here for much of the week was as calm as you could never have imagined, mimicking a smooth texture of finely rippled glass. If I didn’t know better, I could have happily tested the surface with a pair of skates. Just like those on the Margaret, the Karen lads were hard working and very much family orientated, with a few recent and proud dads amongst the crew. Despite being a young bunch, they had a level of maturity and knowledge of this livelihood well beyond their years and it was once again humbling to be around such decent and diligent folk; their continuous graft firmly putting me in my place as I simply clicked away throughout long days behind the camera. The Waterdance commission continued throughout much of 2016, with further Beamers

and Netters out of Brixham and Newlyn, along with an few additional day boats added to the list; the picturesque Exmouth Marina and familiar stomping grounds of Plymouth’s Sutton Harbour to venture forth from. With every outing, I continued to write an account of my time at sea with four and five page spreads in Fishing News, much to the delight of my photojournalism aspirations. By November I had now logged over two months at sea, and with just two vessels left to complete the Waterdance commission in early 2017, what lay ahead for me was anyone’s guess. I just hoped that whatever plans were in store for me, they would still be very much focused on the continual documentation of the many lives and livelihoods at sea; a place as vastly daunting and foreign as the far reaching skies forever above. Find out more at www. tonyfitzsimmons.com