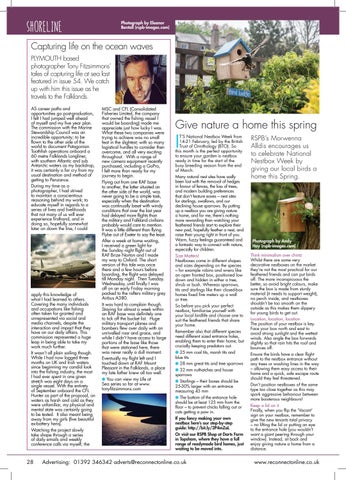 Capturing life on the ocean waves PLYMOUTH based photographer Tony Fitzsimmons’ tales of capturing life at sea last featured in issue 54. We catch up with him this issue as he travels to the Falklands. AS career paths and opportunities go post-graduation, I felt I had jumped well ahead of myself and my five year plan. The commission with the Marine Stewardship Council was an incredible opportunity; to be flown to the other side of the world to document Patagonian Toothfish operations onboard a 60 metre Falklands Longliner, with southern Atlantic and sub Antarctic waters as my backdrop, it was certainly a far cry from my usual destination and method of getting to Penzance. During my time as a photographer, I had strived to maintain a conscientious reasoning behind my work; to educate myself in regards to a series of lives and livelihoods that not many of us will ever experience firsthand, and in doing so, hopefully somewhat later on down the line, I could

apply this knowledge of what I had learned to others. Covering the many individuals and occupations like fishing often taken for granted and unrepresented via social and media channels, despite the interaction and impact that they have on our daily affairs. This commission represented a huge leap in being able to take my work much further. It wasn’t all plain sailing though. While I had now logged three months on UK and Irish waters since beginning my candid look into the fishing industry, the most I had ever spent in one given stretch was eight days on a single vessel. With the entirety of September onboard the CFL Hunter as part of the proposal, on waters as harsh and cold as they were unfamiliar, my physical and mental state was certainly going to be tested. It also meant being away from my girls (five beautiful ex-battery hens). Watching the project slowly take shape through a series of daily emails and weekly conference calls via myself, the

MSC and CFL (Consolidated Fisheries Limited, the company that owned the fishing vessel I would be boarding) made me appreciate just how lucky I was. What these two companies were trying to achieve was no small feat in the slightest; with so many logistical hurdles to consider then overcome, and all very exciting throughout. With a range of new camera equipment recently purchased, including a GoPro, I felt more than ready for my journey to begin. Flying out from one RAF base to another, the latter situated on the other side of the world, was never going to be a simple task, especially when the destination was continually beset with windy conditions that over the last year had delayed more flights than the military and Falkland civilians probably would care to mention. It was a little different than flying Flybe out of Exeter to say the least. After a week at home waiting, I received a green light for the Sunday night flight out of RAF Brize Norton and I made my way to Oxford. The short version of this tale was once there and a few hours before boarding, the flight was delayed till Monday night. Then Tuesday. Wednesday, until finally I was off on an early Friday morning packed to the rafters military grey Airbus A380. It was hard to complain though. Staying for almost a week within an RAF base was definitely one to tick off the bucket list. Huge military transport planes and bombers flew over daily with an unrivalled roar and grace, and while I didn’t have access to large portions of the base like those that were stationed here, there was never really a dull moment. Eventually my flight left and I touched down at RAF Mount Pleasant in the Falklands, a place my late father knew all too well. l You can view my Life at Sea series so far at www. tonyfitzsimmons.com

Give nature a home this spring

T’S National Nestbox Week from 14-21 February, led by the British Trust of Ornithology (BTO). So this month is the perfect opportunity to ensure your garden is nestbox ready in time for the start of the busy breeding season from the end of March. Many natural nest sites have sadly been lost with the removal of hedges in favour of fences, the loss of trees, and modern building preferences that don’t feature eaves – nest sites for starlings, swallows, and our declining house sparrows. By putting up a nestbox you are giving nature a home, and for me, there’s nothing more rewarding than watching your feathered friends start to explore their new pad, hopefully feather a nest, and raise their young right in front of you. Warm, fuzzy feelings guaranteed and a fantastic way to connect with nature, especially for children. Size Matters! Nestboxes come in different shapes and sizes depending on the species – for example robins and wrens like an open fronted box, positioned low down and hidden in either a tree, shrub or bush. Whereas sparrows, tits and starlings like their closed-box homes fixed five meters up a wall or tree. So before you pick your perfect nestbox, familiarise yourself with your local birdlife and choose one to suit the feathered friends that share your home. Remember also that different species need different sized entrance holes, enabling them to enter their home, but crucially keeping predators out. l 25 mm coal tits, marsh tits and blue tits l 28 mm great tits and tree sparrows l 32 mm nuthatches and house sparrows l Starlings – their boxes should be 25-30% larger with an entrance measuring 45 mm l The bottom of the entrance hole should be at least 125 mm from the floor – to prevent chicks falling out or cats getting a paw in. If you fancy making your own nestbox here’s our step-by-step guide: http://bit.ly/2P4mZaL Or visit our RSPB Shop at Darts Farm in Topsham, where they have a full range of readymade bird homes, just waiting to be moved into.

RSPB’s Morwenna Alldis encourages us to celebrate National Nestbox Week by giving our local birds a home this Spring.

Photograph by Andy Hay (rspb-images.com) Think minimalism over chintz Whilst there are some very decorative nestboxes on the market they’re not the most practical for our feathered friends and can put birds off. The more inconspicuous the better, so avoid bright colours, make sure the box is made from sturdy material (it needs to support weight), no perch inside, and nestboxes shouldn’t be too smooth on the outside as this makes them slippery for young birds to get out. Location, location, location The position of your nestbox is key. Face your box north and east to avoid strong sunlight and the wettest winds. Also angle the box forwards slightly so that rain hits the roof and bounces off. Ensure the birds have a clear flight path to the nestbox entrance without any trees or washing lines in the way – allowing them easy access to their home and a quick, safe escape route should they feel threatened. Don’t position nestboxes of the same type too close together as this may spark aggressive behaviour between more boisterous neighbours! Keep a lid on it Finally, when you flip the ‘Vacant’ sign on your nestbox, remember to give the new tenants total privacy – no lifting the lid or putting an eye to the entrance hole (you wouldn’t want a giant peering through your window). Instead, sit back and enjoy giving nature a home from a distance.