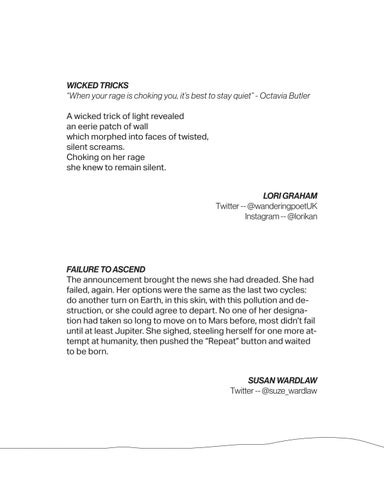 WICKED TRICKS “When your rage is choking you, it’s best to stay quiet” - Octavia Butler A wicked trick of light revealed an eerie patch of wall which morphed into faces of twisted, silent screams. Choking on her rage she knew to remain silent. LORI GRAHAM Twitter -- @wanderingpoetUK Instagram -- @lorikan

FAILURE TO ASCEND The announcement brought the news she had dreaded. She had failed, again. Her options were the same as the last two cycles: do another turn on Earth, in this skin, with this pollution and destruction, or she could agree to depart. No one of her designation had taken so long to move on to Mars before, most didn’t fail until at least Jupiter. She sighed, steeling herself for one more attempt at humanity, then pushed the “Repeat” button and waited to be born. SUSAN WARDLAW Twitter -- @suze_wardlaw