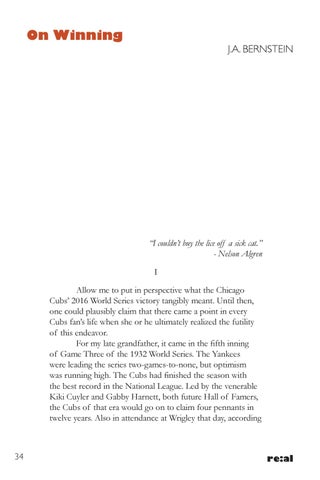 “I couldn’t buy the lice off a sick cat.” - Nelson Algren I Allow me to put in perspective what the Chicago Cubs’ 2016 World Series victory tangibly meant. Until then, one could plausibly claim that there came a point in every Cubs fan’s life when she or he ultimately realized the futility of this endeavor. For my late grandfather, it came in the fifth inning of Game Three of the 1932 World Series. The Yankees were leading the series two-games-to-none, but optimism was running high. The Cubs had finished the season with the best record in the National League. Led by the venerable Kiki Cuyler and Gabby Harnett, both future Hall of Famers, the Cubs of that era would go on to claim four pennants in twelve years. Also in attendance at Wrigley that day, according