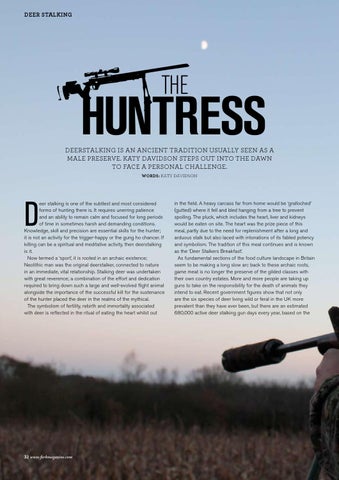 Deerstalking is an ancient traDition usually seen as a male preserve. katy DaviDson steps out into the Dawn to face a personal challenge. WORDS: Katy DaviDson

eer stalking is one of the subtlest and most considered forms of hunting there is. It requires unerring patience and an ability to remain calm and focused for long periods of time in sometimes harsh and demanding conditions. Knowledge, skill and precision are essential skills for the hunter; it is not an activity for the trigger-happy or the gung ho chancer. If killing can be a spiritual and meditative activity, then deerstalking is it. Now termed a ‘sport’, it is rooted in an archaic existence; Neolithic man was the original deerstalker, connected to nature in an immediate, vital relationship. Stalking deer was undertaken with great reverence; a combination of the effort and dedication required to bring down such a large and well-evolved flight animal alongside the importance of the successful kill for the sustenance of the hunter placed the deer in the realms of the mythical. The symbolism of fertility, rebirth and immortality associated with deer is reflected in the ritual of eating the heart whilst out

in the field. A heavy carcass far from home would be ‘gralloched’ (gutted) where it fell and bled hanging from a tree to prevent spoiling. The pluck, which includes the heart, liver and kidneys would be eaten on site. The heart was the prize piece of this meal, partly due to the need for replenishment after a long and arduous stalk but also laced with intonations of its fabled potency and symbolism. The tradition of this meal continues and is known as the ‘Deer Stalkers Breakfast’. As fundamental sections of the food culture landscape in Britain seem to be making a long slow arc back to these archaic roots, game meat is no longer the preserve of the gilded classes with their own country estates. More and more people are taking up guns to take on the responsibility for the death of animals they intend to eat. Recent government figures show that not only are the six species of deer living wild or feral in the UK more prevalent than they have ever been, but there are an estimated 680,000 active deer stalking gun days every year, based on the 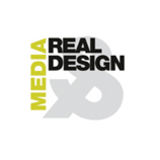