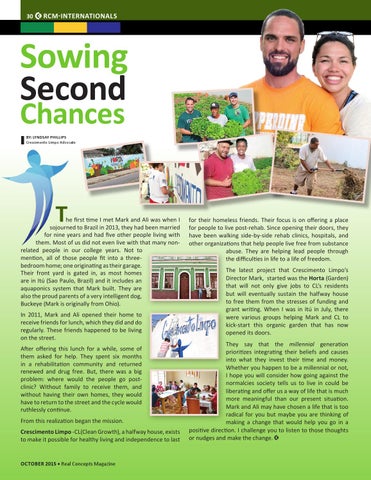 he first time I met Mark and Ali was when I sojourned to Brazil in 2013, they had been married for nine years and had five other people living with them. Most of us did not even live with that many nonrelated people in our college years. Not to mention, all of those people fit into a threebedroom home; one originating as their garage. Their front yard is gated in, as most homes are in Itú (Sao Paulo, Brazil) and it includes an aquaponics system that Mark built. They are also the proud parents of a very intelligent dog, Buckeye (Mark is originally from Ohio). In 2011, Mark and Ali opened their home to receive friends for lunch, which they did and do regularly. These friends happened to be living on the street. After offering this lunch for a while, some of them asked for help. They spent six months in a rehabilitation community and returned renewed and drug free. But, there was a big problem: where would the people go postclinic? Without family to receive them, and without having their own homes, they would have to return to the street and the cycle would ruthlessly continue. From this realization began the mission. Crescimento Limpo -CL(Clean Growth), a halfway house, exists to make it possible for healthy living and independence to last

for their homeless friends. Their focus is on offering a place for people to live post-rehab. Since opening their doors, they have been walking side-by-side rehab clinics, hospitals, and other organizations that help people live free from substance abuse. They are helping lead people through the difficulties in life to a life of freedom. The latest project that Crescimento Limpo’s Director Mark, started was the Horta (Garden) that will not only give jobs to CL’s residents but will eventually sustain the halfway house to free them from the stresses of funding and grant writing. When I was in Itú in July, there were various groups helping Mark and CL to kick-start this organic garden that has now opened its doors. They say that the millennial generation prioritizes integrating their beliefs and causes into what they invest their time and money. Whether you happen to be a millennial or not, I hope you will consider how going against the normalcies society tells us to live in could be liberating and offer us a way of life that is much more meaningful than our present situation. Mark and Ali may have chosen a life that is too radical for you but maybe you are thinking of making a change that would help you go in a positive direction. I challenge you to listen to those thoughts or nudges and make the change.