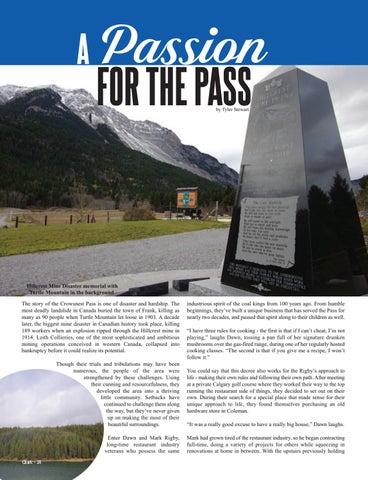 FOR THE PASS by Tyler Stewart

Hillcrest Mine Disaster memorial with Turtle Mountain in the background

The story of the Crowsnest Pass is one of disaster and hardship. The most deadly landslide in Canada buried the town of Frank, killing as many as 90 people when Turtle Mountain let loose in 1903. A decade later, the biggest mine disaster in Canadian history took place, killing 189 workers when an explosion ripped through the Hillcrest mine in 1914. Leith Collieries, one of the most sophisticated and ambitious mining operations conceived in western Canada, collapsed into bankruptcy before it could realize its potential. Though their trials and tribulations may have been numerous, the people of the area were strengthened by these challenges. Using their cunning and resourcefulness, they developed the area into a thriving little community. Setbacks have continued to challenge them along the way, but they’ve never given up on making the most of their beautiful surroundings.

industrious spirit of the coal kings from 100 years ago. From humble beginnings, they’ve built a unique business that has served the Pass for nearly two decades, and passed that spirit along to their children as well. “I have three rules for cooking - the first is that if I can’t cheat, I’m not playing,” laughs Dawn, tossing a pan full of her signature drunken mushrooms over the gas-fired range, during one of her regularly hosted cooking classes. “The second is that if you give me a recipe, I won’t follow it.”

You could say that this decree also works for the Rigby’s approach to life - making their own rules and following their own path. After meeting at a private Calgary golf course where they worked their way to the top running the restaurant side of things, they decided to set out on their own. During their search for a special place that made sense for their unique approach to life, they found themselves purchasing an old hardware store in Coleman. “It was a really good excuse to have a really big house,” Dawn laughs.

Mark had grown tired of the restaurant industry, so he began contracting full-time, doing a variety of projects for others while squeezing in renovations at home in between. With the upstairs previously holding