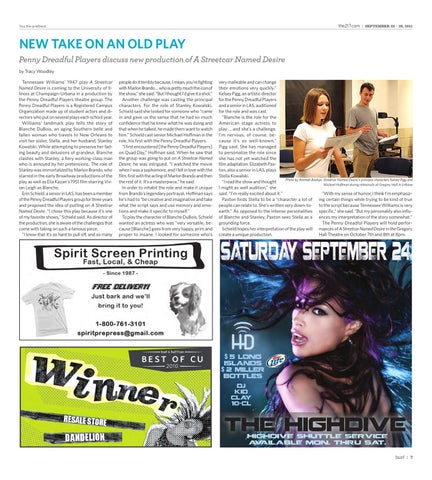 NEW TAKE ON AN OLD PLAY Penny Dreadful Players discuss new production of A Streetcar Named Desire by Tracy Woodley Tennessee Williams’ 1947 play A Streetcar Named Desire is coming to the University of Illinois at Champaign-Urbana in a production by the Penny Dreadful Players theatre group. The Penny Dreadful Players is a Registered Campus Organization made up of student actors and directors who put on several plays each school year. Williams’ landmark play tells the story of Blanche DuBois, an aging Southern belle and fallen woman who travels to New Orleans to visit her sister, Stella, and her husband, Stanley Kowalski. While attempting to preserve her fading beauty and delusions of grandeur, Blanche clashes with Stanley, a fiery working-class man who is annoyed by her pretensions. The role of Stanley was immortalized by Marlon Brando, who starred in the early Broadway productions of the play as well as Elia Kazan’s 1951 film starring Vivian Leigh as Blanche. Erin Schield, a senior in LAS, has been a member of the Penny Dreadful Players group for three years and proposed the idea of putting on A Streetcar Named Desire. “I chose this play because it’s one of my favorite shows,” Schield said. As director of the production, she is aware of the challenges that come with taking on such a famous piece. “I know that it’s so hard to pull off, and so many

people do it terribly because, I mean, you’re fighting with Marlon Brando ... who is pretty much the icon of the show,” she said. “But I thought I’d give it a shot.” Another challenge was casting the principal characters. For the role of Stanley Kowalski, Schield said she looked for someone who “came in and gave us the sense that he had so much confidence that he knew what he was doing and that when he talked, he made them want to watch him.” Schield cast senior Michael Hoffman in the role, his first with the Penny Dreadful Players. “I first encountered [the Penny Dreadful Players] on Quad Day,” Hoffman said. When he saw that the group was going to put on A Streetcar Named Desire, he was intrigued. “I watched the movie when I was a sophomore, and I fell in love with the film, first with the acting of Marlon Brando and then the rest of it. It’s a masterpiece,” he said. In order to inhabit the role and make it unique from Brando’s legendary portrayal, Hoffman says he’s had to “be creative and imaginative and take what the script says and use memory and emotions and make it specific to myself.” To play the character of Blanche DuBois, Schield wanted an actress who was “very versatile, because [Blanche] goes from very happy, prim and proper to insane. I looked for someone who’s

very malleable and can change their emotions very quickly.” Kelsey Pigg, an artistic director for the Penny Dreadful Players and a senior in LAS, auditioned for the role and was cast. “Blanche is the role for the American stage actress to play ... and she’s a challenge. I’m nervous, of course, because it’s so well-known,” Pigg said. She has managed to personalize the role since she has not yet watched the film adaptation. Elizabeth Paxton, also a senior in LAS, plays Stella Kowalski. Photo by Animah Boakye. Streetcar Named Desire&#39;s principal characters Kelsey Pigg and “I read the show and thought Michael Hoffman during rehearsals at Gregory Hall in Urbana I might as well audition,” she said. “I’m really excited about it.” “With my sense of humor, I think I’m emphasizPaxton finds Stella to be a “character a lot of ing certain things while trying to be kind of true people can relate to. She’s written very down-to- to the script because Tennessee Williams is very earth.” As opposed to the intense personalities specific,” she said. “But my personality also influof Blanche and Stanley, Paxton sees Stella as a ences my interpretation of the story somewhat.” grounding force. The Penny Dreadful Players will hold perforSchield hopes her interpretation of the play will mances of A Streetcar Named Desire in the Gregory create a unique production. Hall Theatre on October 7th and 8th at 8pm. 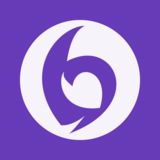