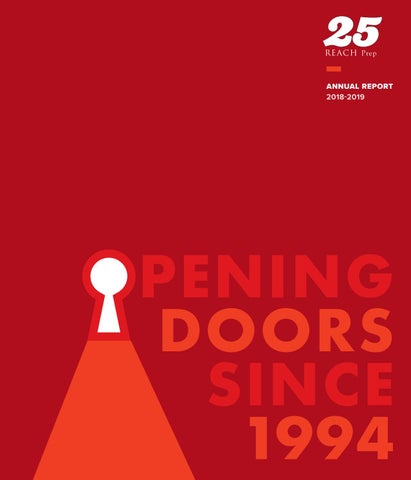 were deeply committed to the belief that academically talented students of color from underserved communities deserved access to the kind of educational opportunities that could dramatically change the course of their lives. The knowledge and experience we've gained over more than two and a half decades continues to inspire us and inform our strategic trajectory. Unique in its comprehensive approach and highly personalized, nimble model, REACH Prep has become a leader in the field of educational access. Today, we stand ready to chart an even more exciting, hopeful and promising path forward. None of this would be possible without the ongoing generosity and commitment of our REACH Prep community. Together, we remain committed to serving future generations of extraordinary students.

ACCESS COMMITMENT IMPACT EXCELLENCE REACH Prep's core values define us as a community striving to empower young Scholars through education. Programs offered by REACH Prep ensure that our students are engaged in meaningful opportunities to develop the skills and motivation that enable them to become leaders in their communities.

Dear Friends, It is our pleasure to share this year’s annual report with you and our many supporters, donors and champions whose generosity helped make our 25th year a great success. These last few months have challenged all of us in ways we never could have imagined. Now, as we continue to navigate this historic public health crisis, we are adjusting our daily routines in large and small ways. Even before the full impact of COVID-19 is fully understood, we have already witnessed that the toll on communities of color has been especially deep and extensive. REACH Prep Scholars and their families have found themselves needing to quickly adapt to new challenges and demands of online learning, while simultaneously coping with the stress of seeing family members and loved ones continue to work despite the risks and potential consequences. We want to acknowledge this fact not only out of gratitude for the sacrifices so many families have made over the past several months, but also because it offers a unique window into the types of families and students who make REACH Prep such a vibrant, effective agent of change. REACH Prep’s mission is as relevant today as it was in 1994 and, while our programming has evolved to meet the changing needs of our Scholars, we remain committed to helping them realize their academic potential and emerge as inspiring future leaders as they move through their 12-year journey with us. As we embark on our 26th year, we wish to also extend our deepest thanks to our Board of Directors whose dedication and leadership remain invaluable. On behalf of everyone at REACH Prep, thank you for your support and continued partnership. Together we will continue impacting the lives of today’s Scholars and those of tomorrow. With deepest gratitude,

Jose lives in New Rochelle with his three younger brothers, and his mom and dad who are originally from Guatemala and Mexico. Even as a fourth grader, when we first met Jose, he was mature, respectful, compassionate, curious and always trying to be the best student and teammate he could possibly be. For three consecutive summers, Jose has attended camp through REACH Prepâ&#x20AC;&#x2122;s partnership with the John Austin Cheley Foundation. With this opportunity, Jose has been able to attend Sanborn Western Camps in Colorado. Over the years, we have seen his independence, confidence and leadership skills grow. This is in large part due to stepping outside of his comfort zone and challenging himself to embrace new experiences through REACH Prep and at camp.

Through REACH Prep I have gained access to countless opportunities I never would have experienced such as fencing, community service events and summer camp, in addition to consistent support from mentors who are genuinely interested in seeing me succeed both academically and socially.

REACH Prep has been by my side for so many years helping me find and create my own opportunities. Having REACH Prep counselors to support me in my educational journey all these years, encouraging me to seek out that which excites me and brings me joy has drastically shaped who I am today. Without having REACH Prep on my side, I wouldnâ&#x20AC;&#x2122;t have taken nearly as many chances, in fear of not having the necessary support needed to succeed.

Now a first-year student at Dartmouth College in New Hampshire, Dhasiya is a graduate of the King School and is originally from Stamford, CT. Dhasiya has always stood out amongst her peers due to her courage, motivation, intellectual curiosity and work ethic. As a young person Dhasiya used her creativity to build lego models, at King we saw her work ethic flourish in her role as Senior Class Vice President, and now we continue to see her thrive in the classroom and in her extracurriculars at Dartmouth. Dhasiya has a commitment and passion for learning, particularly about French language, culture and cinema. At King she was interested in attending a French school with no formal exchange curriculum, so she created her own.

THE REACH PREP 12-YEAR CONTINUUM Since its founding in 1994, REACH Prep has directed its targeted efforts to help high-achieving Black and Latinx students prepare for success in, and graduate from, top-tier colleges and universities. Our model of rigorous preparation, individualized support and close academic monitoring helps students develop their academic, personal and early professional potential. A studentâ&#x20AC;&#x2122;s REACH Prep journey, with all of its comprehensive components, is a proven way to combat the statistics of historically underrepresented students gaining access to and thriving in independent school and college. High expectations, leadership and giving back are key elements of what REACH Prep expects from its students through their 12-year experience.

Why have I stayed with REACH Prep for all these years? Because of the students, 100%. REACH Prep students are bright, responsible and want to excel. They want challenge and they want to be creative. It is that type of academic excellence that makes it easy to walk into a classroom on a Saturday after a long work week. When you see children that want to learn and challenge you to be an excellent teacher, itâ&#x20AC;&#x2122;s invigorating.

Originally from Yorktown Heights, NY, Michelle has taught at REACH Prep’s preparatory component, Prep Academy, for 24 out of our 25 years. REACH Prep was a single-sex program when Michelle first started with us, and back then she was our only faculty member. Now, she is the technology teacher for our co-ed Prep Academy program, working alongside faculty members who teach subjects such as Latin, Economics, English, Science, Math, Art and Wellness. During the week, Michelle is the Director of Instructional Technology at School of the Holy Child, Rye, where she has worked for the past 26 years. Michelle’s educational philosophy is “learning by doing”. She believes everyone, not just students, learn best when they are engaged, motivated and curious. It’s Michelle’s life’s work to inspire, break down content into achievable mastery and develop a love of learning in every student she works with.

THE SERENBETZ FAMILY FOUNDATION Supporter since 2001

The Serenbetz Family Foundation was established in 1997 by Warren and Thelma Serenbetz, and is now run by a Board of Trustees made up of their children and grandchildren. Honoring the belief that success comes from educational achievement in a supportive environment, the Foundation seeks to enrich the lives of children and young adults by supporting organizations that offer opportunities for educational and personal growth. The Serenbetz Family Foundation has been a dedicated supporter of REACH Prep since 2001, and has provided REACH Prep with nearly $1.2 million of funding over the course of their twentyyear partnership with us. Involvement and volunteering being a key priority for the Foundation, REACH Prep has been lucky to have the dedicated involvement of two of their Trustees, Jean Serenbetz as a former Director on our Board and now Skyler Serenbetz on our Junior Council.

Since the Serenbetz Family Foundation began supporting REACH in 2001, it has been rewarding to grow in partnership with the programs at REACH Prep that align so well with our own mission.

25TH ANNIVERSARY GALA On November 1, 2019, REACH Prep celebrated its 25th Anniversary Gala at Abigail Kirsch at The Loading Dock in Stamford, CT. Over 300 guests enjoyed a live auction with Robbie Gordy from Christie’s New York, along with speeches from Alumni and Scholars. The evening’s featured speaker, Carlos Brito, CEO of AB InBev, shared his personal story, which resonated with REACH Prep’s work and larger mission, and was an inspiration to all. The evening raised over $900,000 in new charitable donations that will impact not only today’s Scholars, but also those who will follow in their footsteps in years to come.

I LOVE THE 90s! On June 14, 2019, REACH Prep’s Junior Council hosted its inaugural fundraising event, I Love the ‘90s!, in honor of REACH Prep’s founding year, 1994. Guests came in their favorite ‘90s attire, danced to an amazing live cover band, enjoyed drinks from Two Roads Brewing Company, RISE Brewing Company, Horseneck Wine & Spirits, and food from On the Marc Catering. The evening was a terrific success thanks to the outstanding work of the Junior Council and its Event Committee.

On October 24, 2018, REACH Prep held its second annual NYCbased fundraiser, An Evening of Inspiration. Featured speakers included REACH Prep Scholar, Emily Peña, Alumni, Vanessa Rios and Darren Douglas, and current parent, Vicky Peña, all of whom shared the powerful impact REACH Prep has had on their lives and the lives of their families. While REACH Prep started in Greenwich, CT, the organization has long served families in the Bronx as well as Westchester and Fairfield Counties.

We are tremendously grateful for the generous contributions received throughout the year from July 1, 2018 to June 30, 2019.

GIFTS IN HONOR In Honor of Kim Augustine Virginia Genereux

For more information, please visit our website at www.reachprep.org or call us at 203.487.0750

THANK YOU REACH Prep would like to extend our deepest gratitude to Adam Rohdie, Andrea Mann, Cheryl Plummer, Doug Melillo & The Greenwich Country Day School for hosting our Prep Academy program on their campus.

REACH Prep provides access to transformative educational experiences that empower underserved, highachieving students to graduate from top colleges and emerge as the next generation of leaders.