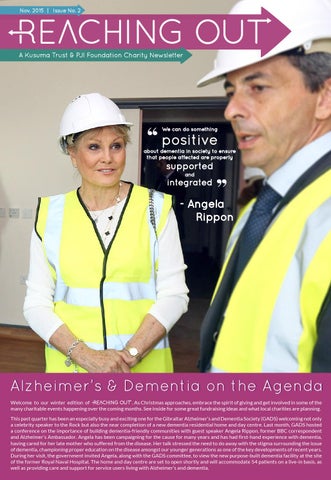 We can do something

Alzheimer’s &amp; Dementia on the Agenda Welcome to our winter edition of . As Christmas approaches, embrace the spirit of giving and get involved in some of the many charitable events happening over the coming months. See inside for some great fundraising ideas and what local charities are planning. This past quarter has been an especially busy and exciting one for the Gibraltar Alzheimer’s and Dementia Society (GADS) welcoming not only a celebrity speaker to the Rock but also the near completion of a new dementia residential home and day centre. Last month, GADS hosted a conference on the importance of building dementia-friendly communities with guest speaker Angela Rippon, former BBC correspondent and Alzheimer’s Ambassador. Angela has been campaigning for the cause for many years and has had first-hand experience with dementia, having cared for her late mother who suffered from the disease. Her talk stressed the need to do away with the stigma surrounding the issue of dementia, championing proper education on the disease amongst our younger generations as one of the key developments of recent years. During her visit, the government invited Angela, along with the GADS committee, to view the new purpose-built dementia facility at the site of the former Royal Naval Hospital. The home and day centre are set to open shortly and will accommodate 54 patients on a live-in basis, as well as providing care and support for service users living with Alzheimer’s and dementia.

. Give a little . . A Spotlight on Sonia Golt Can you tell us how Bosom Buddies was founded? The Bosom Buddies Cancer Trust was formed after six years of very successful annual fashion shows which aimed to help cancer survivors find moments in life at which to smile again. Initially, the substantial funds generated from the fashion shows were donated to local cancer charities such as Breast Cancer Support Gibraltar, Cancer Relief, and Cancer Research Gibraltar Branch. More recently, with the sale of my granddaughter’s Stella’s first published children’s stories, we also raised over £1,200 for Research into Childhood Cancer.

So how exactly are your funds raised?

The idea to organise a charitable collection and distribution of Christmas goods in Gibraltar began thirty years ago with a small group of people who had been involved in the original ‘Cursillos*’. As a result of the closed frontier, the situation for most people in Gibraltar at the time was very different to what we know today. Many families and elderly people endured great hardships, often depending on Social Services and on donations from charitable institutions to get by. Around this time, the campaign was started to collect goods for those in need. Traders donated food supplies and typical Christmas goodies. These goods were delivered to the Cathedral a few days before Christmas day, with collection boxes situated at the entrance to the Cathedral patio, and the public invited to make donations, either financial or in kind. Lists of families in need were provided by Social Services and charitable groups. Distribution was certainly very hard work but the reward was equally fulfilling. Donations were incredibly well received, especially amongst those elderly people who were living on their own. More than the gifts, they really welcomed the opportunity for a chat. Since Main Street became pedestrianized, the collection and distribution point has moved to St Theresa’s Parish. Today, we continue to receive fantastic support from the community and, in recent years, from many Bayside students who have joined in the initiative. We would like to take this opportunity to thank all of you who have been involved in this effort throughout the years and encourage all those who want to contribute to take part. After all, in the words of St Francis of Assisi, “it is in giving that we receive.” - Father Charlie Azzopardi

Our main fundraising vehicle is the annual fashion show but we have also just launched our Bosom Buddies calendar which we hope will be a great success due to the front cover having been painted by Christian Hook (Sky Portrait Artist of the Year Winner 2015). Calendars will be on sale at the Convent Fair and again at Morrisons on the 12th December, with part of the proceeds also going towards the GBC Open Day. For more information please visit: www.bosombuddiesgib.com

* ’Cursillos’ in Christianity (in Spanish: Cursillos de Cristiandad, short course of Christianity) is an apostolic movement of the Roman Catholic Church.

The Open Day Charitable Trust is Gibraltar’s largest fundraising organisation and is the charitable arm of 201 4 the Rock’s national broadcaster, GBC. The Trust’s fundraising efforts began in the 1960s with a view to R e collecting money for the Three Kings’ Cavalcade, which has now become an annual parade celebrating co rd the feast of the Epiphany and closing the official Christmas celebrations locally. To this day, the Open Tota l: Day Charitable Trust continues to support the event, not only by partly funding the public element of it, £130,0 00 but also by providing gifts for underprivileged children and those who are unfortunately in hospital over the Christmas period. Since its inception, the Trust’s fundraising efforts have grown exponentially, reaching community-wide and helping raise over £100,000 every year through the marathon TV and radio shows that GBC stages annually on the last Wednesday before Christmas, and also through numerous events and activities organised by associations, companies and individuals in the Trust’s name. A group of Trustees thereafter consider funding bids from locally-registered charities for specific projects which they may be considering to undertake. These bids undergo a thorough examination process before financial grants are awarded, so as to ensure that every penny raised through the GBC Open Day goes to deserving causes. If you would like to get involved, email in at: openday@gbc.gi

1. Publicise your event through Facebook, Twitter and flyers. 2. Formulate a clear idea of all potential costs before approaching corporate sponsors.

All participants are to dress as Father Christmas. Charge a small entry fee and invite your Santas to raise their own sponsorship funds.

3. After your event, be sure to thank sponsors and volunteers publicly.

Great for offices! Ask colleagues to make a small donation and award a prize for the best jumper.

Ask local restaurants for deals on tapas/ drinks and sell tickets for the crawl. Include a Christmas-themed dress code and ask for donations along the way.

Charge an entry fee and give a prize to the winner. You’ll be amazed at what people will do for glory!

All you need is a good range of paper and gift tags and some jolly volunteers who don’t mind a paper cut or 2.

Get people to sponsor you per metre, do it in public, and get passers-by to donate.

Organise a flash mob where everyone is dressed up in festive theme. Make sure the volunteers have lots of buckets to collect donations from unsuspecting spectators.

WHAT’S BEEN HAPPENING? To feature in our next edition, email: reachingoutgib@gmail.com A big thank you to all our contributing photographers!

Welcome to our winter edition of Reaching Out, Gibraltar’s charity newsletter. As Christmas approaches, embrace the spirit of giving and get involved in some of the many charitable events happening over the coming months. See inside for some great fundraising ideas and what local charities are planning. If you would like to contribute to our next edition or send us any press releases about your charity’s activities please get in contact with our team at: reachingoutgib@gmail.com 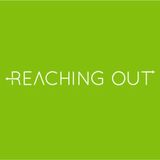