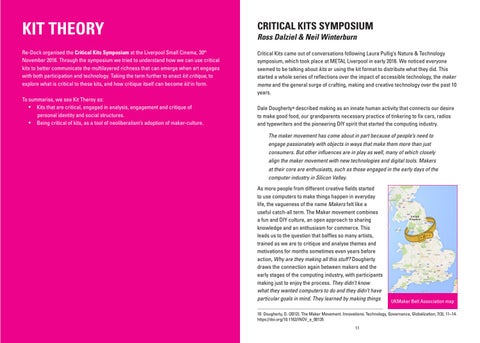 Re-Dock organised the Critical Kits Symposium at the Liverpool Small Cinema, 30th November 2016. Through the symposium we tried to understand how we can use critical kits to better communicate the multilayered richness that can emerge when art engages with both participation and technology. Taking the term further to enact kit critique, to explore what is critical to these kits, and how critique itself can become kit in form.

Critical Kits came out of conversations following Laura Pullig’s Nature & Technology symposium, which took place at METAL Liverpool in early 2016. We noticed everyone seemed to be talking about kits or using the kit format to distribute what they did. This started a whole series of reflections over the impact of accessible technology, the maker meme and the general surge of crafting, making and creative technology over the past 10 years.

To summarise, we see Kit Theroy as: •  Kits that are critical, engaged in analysis, engagement and critique of personal identity and social structures. •  Being critical of kits, as a tool of neoliberalism’s adoption of maker-culture.

Dale Dougherty10 described making as an innate human activity that connects our desire to make good food, our grandparents necessary practice of tinkering to fix cars, radios and typewriters and the pioneering DIY spirit that started the computing industry. The maker movement has come about in part because of people’s need to engage passionately with objects in ways that make them more than just consumers. But other influences are in play as well, many of which closely align the maker movement with new technologies and digital tools. Makers at their core are enthusiasts, such as those engaged in the early days of the computer industry in Silicon Valley. As more people from different creative fields started to use computers to make things happen in everyday life, the vagueness of the name Makers felt like a useful catch-all term. The Maker movement combines a fun and DIY culture, an open approach to sharing knowledge and an enthusiasm for commerce. This leads us to the question that baffles so many artists, trained as we are to critique and analyse themes and motivations for months sometimes even years before action, Why are they making all this stuff? Dougherty draws the connection again between makers and the early stages of the computing industry, with participants making just to enjoy the process. They didn’t know what they wanted computers to do and they didn’t have particular goals in mind. They learned by making things