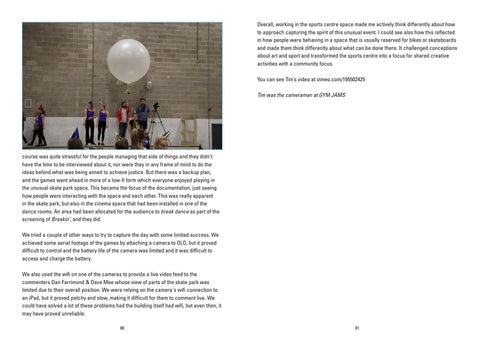 Overall, working in the sports centre space made me actively think differently about how to approach capturing the spirit of this unusual event. I could see also how this reflected in how people were behaving in a space that is usually reserved for bikes or skateboards and made them think differently about what can be done there. It challenged conceptions about art and sport and transformed the sports centre into a focus for shared creative activities with a community focus. You can see Timâ&#x20AC;&#x2122;s video at vimeo.com/195502425 Tim was the cameraman at GYM JAMS

course was quite stressful for the people managing that side of things and they didn't have the time to be interviewed about it, nor were they in any frame of mind to do the ideas behind what was being aimed to achieve justice. But there was a backup plan, and the games went ahead in more of a low-fi form which everyone enjoyed playing in the unusual skate park space. This became the focus of the documentation, just seeing how people were interacting with the space and each other. This was really apparent in the skate park, but also in the cinema space that had been installed in one of the dance rooms. An area had been allocated for the audience to break dance as part of the screening of Breakinâ&#x20AC;&#x2122;, and they did. We tried a couple of other ways to try to capture the day with some limited success. We achieved some aerial footage of the games by attaching a camera to OLO, but it proved difficult to control and the battery life of the camera was limited and it was difficult to access and charge the battery. We also used the wifi on one of the cameras to provide a live video feed to the commenters Dan Farrimond & Dave Mee whose view of parts of the skate park was limited due to their overall position. We were relying on the camera's wifi connection to an iPad, but it proved patchy and slow, making it difficult for them to comment live. We could have solved a lot of these problems had the building itself had wifi, but even then, it may have proved unreliable. 80