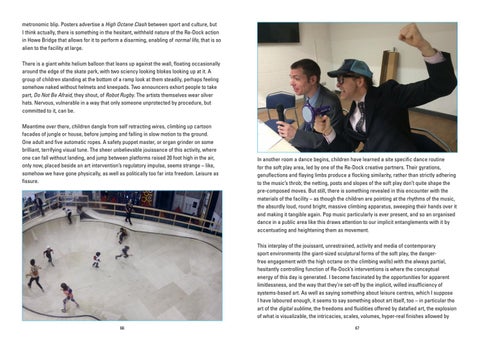 metronomic blip. Posters advertise a High Octane Clash between sport and culture, but I think actually, there is something in the hesitant, withheld nature of the Re-Dock action in Howe Bridge that allows for it to perform a disarming, enabling of normal life, that is so alien to the facility at large. There is a giant white helium balloon that leans up against the wall, floating occasionally around the edge of the skate park, with two sciency looking blokes looking up at it. A group of children standing at the bottom of a ramp look at them steadily, perhaps feeling somehow naked without helmets and kneepads. Two announcers exhort people to take part, Do Not Be Afraid, they shout, of Robot Rugby. The artists themselves wear silver hats. Nervous, vulnerable in a way that only someone unprotected by procedure, but committed to it, can be. Meantime over there, children dangle from self retracting wires, climbing up cartoon facades of jungle or house, before jumping and falling in slow motion to the ground. One adult and five automatic ropes. A safety puppet master, or organ grinder on some brilliant, terrifying visual tune. The sheer unbelievable jouissance of this activity, where one can fall without landing, and jump between platforms raised 20 foot high in the air, only now, placed beside an art intervention’s regulatory impulse, seems strange – like, somehow we have gone physically, as well as politically too far into freedom. Leisure as fissure.

In another room a dance begins, children have learned a site specific dance routine for the soft play area, led by one of the Re-Dock creative partners. Their gyrations, genuflections and flaying limbs produce a flocking similarity, rather than strictly adhering to the music’s throb; the netting, posts and slopes of the soft play don’t quite shape the pre-composed moves. But still, there is something revealed in this encounter with the materials of the facility – as though the children are pointing at the rhythms of the music, the absurdly loud, round bright, massive climbing apparatus, sweeping their hands over it and making it tangible again. Pop music particularly is ever present, and so an organised dance in a public area like this draws attention to our implicit entanglements with it by accentuating and heightening them as movement. This interplay of the jouissant, unrestrained, activity and media of contemporary sport environments (the giant-sized sculptural forms of the soft play, the dangerfree engagement with the high octane on the climbing walls) with the always partial, hesitantly controlling function of Re-Dock’s interventions is where the conceptual energy of this day is generated. I become fascinated by the opportunities for apparent limitlessness, and the way that they’re set-off by the implicit, willed insufficiency of systems-based art. As well as saying something about leisure centres, which I suppose I have laboured enough, it seems to say something about art itself, too – in particular the art of the digital sublime, the freedoms and fluidities offered by datafied art, the explosion of what is visualizable, the intricacies, scales, volumes, hyper-real finishes allowed by 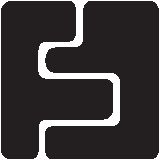