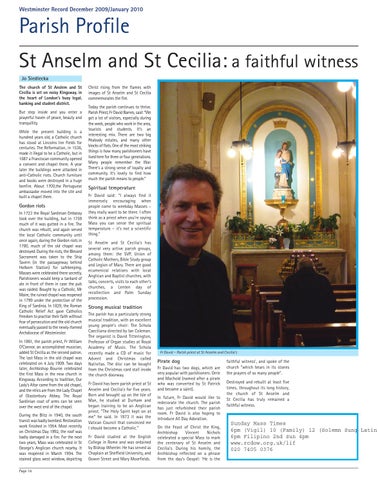 Parish Profile St Anselm and St Cecilia: a faithful witness Jo Siedlecka The church of St Anslem and St Cecilia is set on noisy Kingsway, in the heart of London’s busy legal, banking and student district. But step inside and you enter a prayerful haven of peace, beauty and tranquillity. While the present building is a hundred years old, a Catholic church has stood at Lincolns Inn Fields for centuries. The Reformation, in 1536, made it illegal to be a Catholic, but in 1687 a Franciscan community opened a convent and chapel there. A year later the buildings were attacked in anti-Catholic riots. Church furniture and books were destroyed in a huge bonﬁre. About 1700,the Portuguese ambassador moved into the site and built a chapel there.

Gordon riots In 1723 the Royal Sardinian Embassy took over the building, but in 1759 much of it was gutted in a ﬁre. The church was rebuilt, and again served the local Catholic community until once again, during the Gordon riots in 1780, much of the old chapel was destroyed. During the riots, the Blessed Sacrament was taken to the Ship Tavern (in the passageway behind Holborn Station) for safekeeping. Masses were celebrated there secretly. Parishioners would keep a tankard of ale in front of them in case the pub was raided. Bought by a Catholic, Mr Maire, the ruined chapel was reopened in 1799 under the protection of the King of Sardinia. In 1829, the Roman Catholic Relief Act gave Catholics freedom to practise their faith without fear of persecution and the old church eventually passed to the newly-formed Archdiocese of Westminster. In 1861, the parish priest, Fr William O’Connor, an accomplished musician, added St Cecilia as the second patron. The last Mass in the old chapel was celebrated on 4 July 1909. Two days later, Archbishop Bourne celebrated the ﬁrst Mass in the new church in Kingsway. According to tradition, Our Lady’s Altar came from the old chapel, and the relics are from the Lady Chapel of Glastonbury Abbey. The Royal Sardinian coat of arms can be seen over the west end of the chapel. During the Blitz in 1940, the south transit was badly bombed. Restoration work ﬁnished in 1954. Most recently on Christmas Day 1992, the roof was badly damaged in a ﬁre. For the next two years, Mass was celebrated in St George’s Anglican church nearby. It was reopened in March 1994. The stained glass west window, depicting Page 16

Christ rising from the ﬂames with images of St Anselm and St Cecilia commemorates the ﬁre. Today the parish continues to thrive. Parish Priest, Fr David Barnes, said: “We get a lot of visitors, especially during the week, people who work in the area, tourists and students. It’s an interesting mix. There are two big Peabody estates, and many other blocks of ﬂats. One of the most striking things is how many parishioners have lived here for three or four generations. Many people remember the War. There’s a strong sense of loyalty and community. It’s lovely to ﬁnd how much the parish means to people.”

Spiritual temperature Fr David said: “I always ﬁnd it immensely encouraging when people come to weekday Masses – they really want to be there. I often think as a priest when you’re saying Mass you can sense the spiritual temperature – it’s not a scientiﬁc thing.” St Anselm and St Cecilia’s has several very active parish groups, among them: the SVP, Union of Catholic Mothers, Bible Study group and Legion of Mary. There are good ecumenical relations with local Anglican and Baptist churches, with talks, concerts, visits to each other’s churches, a Lenten day of recollection and Palm Sunday procession.

Strong musical tradition The parish has a particularly strong musical tradition, with an excellent young people’s choir: The Schola Caeciliana directed by Ian Coleman. The organist is David Titterington, Professor of Organ studies at Royal Academy of Music. The Schola recently made a CD of music for Advent and Christmas called Nativitas. The disc can be bought from the Christmas card stall inside the church doorway. Fr David has been parish priest at St Anselm and Cecilia’s for ﬁve years. Born and brought up on the Isle of Man, he studied at Durham and began training to be an Anglican priest. “The Holy Spirit kept on at me” he said. In 1973 it was the Vatican Council that convinced me I should become a Catholic.” Fr David studied at the English College in Rome and was ordained by Bishop Wheeler. He has served as Chaplain at Sheﬃeld University, and Gower Street and Mary Moorﬁelds.

Pirate dog Fr David has two dogs, which are very popular with parishioners: Orrie and Machold (named after a pirate who was converted by St Patrick and became a saint). In future, Fr David would like to redecorate the church. The parish has just refurbished their parish room. Fr David is also hoping to introduce All Day Adoration. On the Feast of Christ the King, Archbishop Vincent Nichols celebrated a special Mass to mark the centenary of St Anselm and Cecilia’s. During his homily, the Archbishop reﬂected on a phrase from the day’s Gospel: ‘He is the

faithful witness’, and spoke of the church “which bears in its stones the prayers of so many people”. Destroyed and rebuilt at least ﬁve times, throughout its long history, the church of St Anselm and St Cecilia has truly remained a faithful witness. 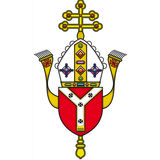