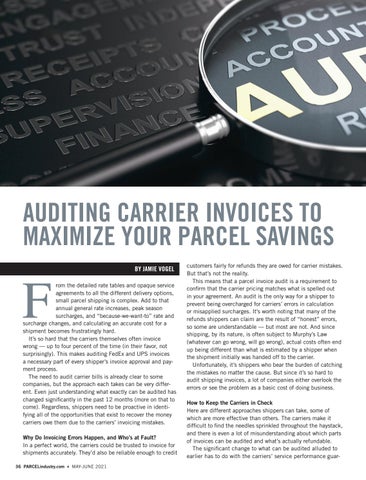 rom the detailed rate tables and opaque service agreements to all the different delivery options, small parcel shipping is complex. Add to that annual general rate increases, peak season surcharges, and “because-we-want-to” rate and surcharge changes, and calculating an accurate cost for a shipment becomes frustratingly hard. It’s so hard that the carriers themselves often invoice wrong — up to four percent of the time (in their favor, not surprisingly). This makes auditing FedEx and UPS invoices a necessary part of every shipper’s invoice approval and payment process. The need to audit carrier bills is already clear to some companies, but the approach each takes can be very different. Even just understanding what exactly can be audited has changed significantly in the past 12 months (more on that to come). Regardless, shippers need to be proactive in identifying all of the opportunities that exist to recover the money carriers owe them due to the carriers’ invoicing mistakes. Why Do Invoicing Errors Happen, and Who’s at Fault? In a perfect world, the carriers could be trusted to invoice for shipments accurately. They’d also be reliable enough to credit

customers fairly for refunds they are owed for carrier mistakes. But that’s not the reality. This means that a parcel invoice audit is a requirement to confirm that the carrier pricing matches what is spelled out in your agreement. An audit is the only way for a shipper to prevent being overcharged for carriers’ errors in calculation or misapplied surcharges. It’s worth noting that many of the refunds shippers can claim are the result of “honest” errors, so some are understandable — but most are not. And since shipping, by its nature, is often subject to Murphy’s Law (whatever can go wrong, will go wrong), actual costs often end up being different than what is estimated by a shipper when the shipment initially was handed off to the carrier. Unfortunately, it’s shippers who bear the burden of catching the mistakes no matter the cause. But since it’s so hard to audit shipping invoices, a lot of companies either overlook the errors or see the problem as a basic cost of doing business. How to Keep the Carriers in Check Here are different approaches shippers can take, some of which are more effective than others. The carriers make it difficult to find the needles sprinkled throughout the haystack, and there is even a lot of misunderstanding about which parts of invoices can be audited and what’s actually refundable. The significant change to what can be audited alluded to earlier has to do with the carriers’ service performance guar-