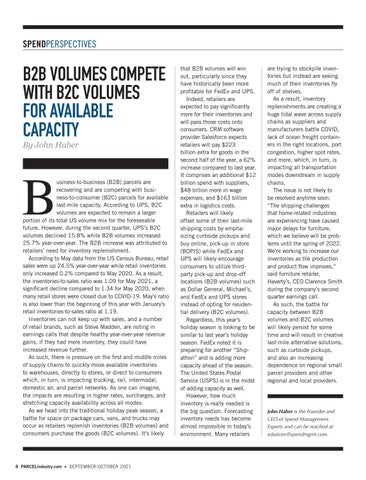 usiness-to-business (B2B) parcels are recovering and are competing with business-to-consumer (B2C) parcels for available last-mile capacity. According to UPS, B2C volumes are expected to remain a larger portion of its total US volume mix for the foreseeable future. However, during the second quarter, UPS’s B2C volumes declined 15.8% while B2B volumes increased 25.7% year-over-year. The B2B increase was attributed to retailers’ need for inventory replenishment. According to May data from the US Census Bureau, retail sales were up 24.5% year-over-year while retail inventories only increased 0.2% compared to May 2020. As a result, the inventories-to-sales ratio was 1.09 for May 2021, a significant decline compared to 1.34 for May 2020, when many retail stores were closed due to COVID-19. May’s ratio is also lower than the beginning of this year with January’s retail inventories-to-sales ratio at 1.19. Inventories can not keep up with sales, and a number of retail brands, such as Steve Madden, are noting in earnings calls that despite healthy year-over-year revenue gains, if they had more inventory, they could have increased revenue further. As such, there is pressure on the first and middle miles of supply chains to quickly move available inventories to warehouses, directly to stores, or direct to consumers which, in turn, is impacting trucking, rail, intermodal, domestic air, and parcel networks. As one can imagine, the impacts are resulting in higher rates, surcharges, and stretching capacity availability across all modes. As we head into the traditional holiday peak season, a battle for space on package cars, vans, and trucks may occur as retailers replenish inventories (B2B volumes) and consumers purchase the goods (B2C volumes). It’s likely

that B2B volumes will win out, particularly since they have historically been more profitable for FedEx and UPS. Indeed, retailers are expected to pay significantly more for their inventories and will pass those costs onto consumers. CRM software provider Salesforce expects retailers will pay $223 billion extra for goods in the second half of the year, a 62% increase compared to last year. It comprises an additional $12 billion spend with suppliers, $48 billion more in wage expenses, and $163 billion extra in logistics costs. Retailers will likely offset some of their last-mile shipping costs by emphasizing curbside pickups and buy online, pick-up in store (BOPIS) while FedEx and UPS will likely encourage consumers to utilize thirdparty pick-up and drop-off locations (B2B volumes) such as Dollar General, Michael’s, and FedEx and UPS stores instead of opting for residential delivery (B2C volumes). Regardless, this year’s holiday season is looking to be similar to last year’s holiday season. FedEx noted it is preparing for another “Shipathon” and is adding more capacity ahead of the season. The United States Postal Service (USPS) is in the midst of adding capacity as well. However, how much inventory is really needed is the big question. Forecasting inventory needs has become almost impossible in today’s environment. Many retailers

are trying to stockpile inventories but instead are seeing much of their inventories fly off of shelves. As a result, inventory replenishments are creating a huge tidal wave across supply chains as suppliers and manufacturers battle COVID, lack of ocean freight containers in the right locations, port congestion, higher spot rates, and more, which, in turn, is impacting all transportation modes downstream in supply chains. The issue is not likely to be resolved anytime soon. “The shipping challenges that home-related industries are experiencing have caused major delays for furniture, which we believe will be problems until the spring of 2022. We’re working to increase our inventories as the production and product flow improves,” said furniture retailer, Haverty’s, CEO Clarence Smith during the company’s second quarter earnings call. As such, the battle for capacity between B2B volumes and B2C volumes will likely persist for some time and will result in creative last-mile alternative solutions, such as curbside pickups, and also an increasing dependence on regional small parcel providers and other regional and local providers.

John Haber is the Founder and CEO of Spend Management Experts and can be reached at solutions@spendmgmt.com.