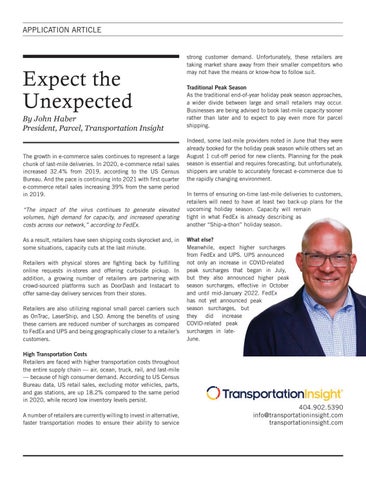 The growth in e-commerce sales continues to represent a large chunk of last-mile deliveries. In 2020, e-commerce retail sales increased 32.4% from 2019, according to the US Census Bureau. And the pace is continuing into 2021 with first quarter e-commerce retail sales increasing 39% from the same period in 2019. “The impact of the virus continues to generate elevated volumes, high demand for capacity, and increased operating costs across our network,” according to FedEx. As a result, retailers have seen shipping costs skyrocket and, in some situations, capacity cuts at the last minute. Retailers with physical stores are fighting back by fulfilling online requests in-stores and offering curbside pickup. In addition, a growing number of retailers are partnering with crowd-sourced platforms such as DoorDash and Instacart to offer same-day delivery services from their stores. Retailers are also utilizing regional small parcel carriers such as OnTrac, LaserShip, and LSO. Among the benefits of using these carriers are reduced number of surcharges as compared to FedEx and UPS and being geographically closer to a retailer’s customers.

strong customer demand. Unfortunately, these retailers are taking market share away from their smaller competitors who may not have the means or know-how to follow suit. Traditional Peak Season As the traditional end-of-year holiday peak season approaches, a wider divide between large and small retailers may occur. Businesses are being advised to book last-mile capacity sooner rather than later and to expect to pay even more for parcel shipping. Indeed, some last-mile providers noted in June that they were already booked for the holiday peak season while others set an August 1 cut-off period for new clients. Planning for the peak season is essential and requires forecasting, but unfortunately, shippers are unable to accurately forecast e-commerce due to the rapidly changing environment. In terms of ensuring on-time last-mile deliveries to customers, retailers will need to have at least two back-up plans for the upcoming holiday season. Capacity will remain tight in what FedEx is already describing as another “Ship-a-thon” holiday season. What else? Meanwhile, expect higher surcharges from FedEx and UPS. UPS announced not only an increase in COVID-related peak surcharges that began in July, but they also announced higher peak season surcharges, effective in October and until mid-January 2022. FedEx has not yet announced peak season surcharges, but they did increase COVID-related peak surcharges in lateJune.

High Transportation Costs Retailers are faced with higher transportation costs throughout the entire supply chain — air, ocean, truck, rail, and last-mile — because of high consumer demand. According to US Census Bureau data, US retail sales, excluding motor vehicles, parts, and gas stations, are up 18.2% compared to the same period in 2020, while record low inventory levels persist. A number of retailers are currently willing to invest in alternative, faster transportation modes to ensure their ability to service