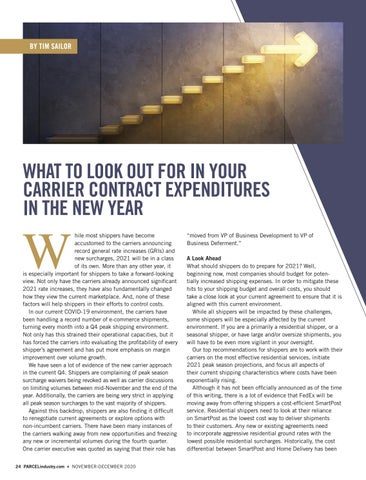 hile most shippers have become accustomed to the carriers announcing record general rate increases (GRIs) and new surcharges, 2021 will be in a class of its own. More than any other year, it is especially important for shippers to take a forward-looking view. Not only have the carriers already announced significant 2021 rate increases, they have also fundamentally changed how they view the current marketplace. And, none of these factors will help shippers in their efforts to control costs. In our current COVID-19 environment, the carriers have been handling a record number of e-commerce shipments, turning every month into a Q4 peak shipping environment. Not only has this strained their operational capacities, but it has forced the carriers into evaluating the profitability of every shipper’s agreement and has put more emphasis on margin improvement over volume growth. We have seen a lot of evidence of the new carrier approach in the current Q4. Shippers are complaining of peak season surcharge waivers being revoked as well as carrier discussions on limiting volumes between mid-November and the end of the year. Additionally, the carriers are being very strict in applying all peak season surcharges to the vast majority of shippers. Against this backdrop, shippers are also finding it difficult to renegotiate current agreements or explore options with non-incumbent carriers. There have been many instances of the carriers walking away from new opportunities and freezing any new or incremental volumes during the fourth quarter. One carrier executive was quoted as saying that their role has

“moved from VP of Business Development to VP of Business Deferment.” A Look Ahead What should shippers do to prepare for 2021? Well, beginning now, most companies should budget for potentially increased shipping expenses. In order to mitigate these hits to your shipping budget and overall costs, you should take a close look at your current agreement to ensure that it is aligned with this current environment. While all shippers will be impacted by these challenges, some shippers will be especially affected by the current environment. If you are a primarily a residential shipper, or a seasonal shipper, or have large and/or oversize shipments, you will have to be even more vigilant in your oversight. Our top recommendations for shippers are to work with their carriers on the most effective residential services, initiate 2021 peak season projections, and focus all aspects of their current shipping characteristics where costs have been exponentially rising. Although it has not been officially announced as of the time of this writing, there is a lot of evidence that FedEx will be moving away from offering shippers a cost-efficient SmartPost service. Residential shippers need to look at their reliance on SmartPost as the lowest cost way to deliver shipments to their customers. Any new or existing agreements need to incorporate aggressive residential ground rates with the lowest possible residential surcharges. Historically, the cost differential between SmartPost and Home Delivery has been