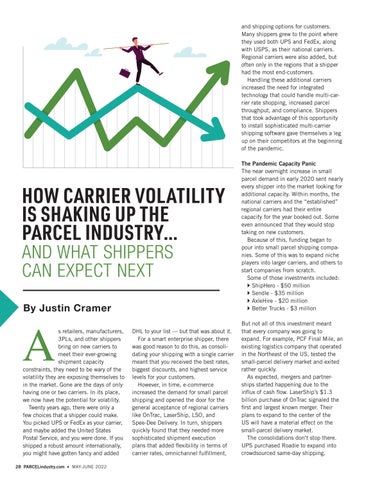 and shipping options for customers. Many shippers grew to the point where they used both UPS and FedEx, along with USPS, as their national carriers. Regional carriers were also added, but often only in the regions that a shipper had the most end-customers. Handling these additional carriers increased the need for integrated technology that could handle multi-carrier rate shopping, increased parcel throughput, and compliance. Shippers that took advantage of this opportunity to install sophisticated multi-carrier shipping software gave themselves a leg up on their competitors at the beginning of the pandemic.

s retailers, manufacturers, 3PLs, and other shippers bring on new carriers to meet their ever-growing shipment capacity constraints, they need to be wary of the volatility they are exposing themselves to in the market. Gone are the days of only having one or two carriers. In its place, we now have the potential for volatility. Twenty years ago, there were only a few choices that a shipper could make. You picked UPS or FedEx as your carrier, and maybe added the United States Postal Service, and you were done. If you shipped a robust amount internationally, you might have gotten fancy and added

DHL to your list — but that was about it. For a smart enterprise shipper, there was good reason to do this, as consolidating your shipping with a single carrier meant that you received the best rates, biggest discounts, and highest service levels for your customers. However, in time, e-commerce increased the demand for small parcel shipping and opened the door for the general acceptance of regional carriers like OnTrac, LaserShip, LSO, and Spee-Dee Delivery. In turn, shippers quickly found that they needed more sophisticated shipment execution plans that added flexibility in terms of carrier rates, omnichannel fulfillment,

The Pandemic Capacity Panic The near overnight increase in small parcel demand in early 2020 sent nearly every shipper into the market looking for additional capacity. Within months, the national carriers and the “established” regional carriers had their entire capacity for the year booked out. Some even announced that they would stop taking on new customers. Because of this, funding began to pour into small parcel shipping companies. Some of this was to expand niche players into larger carriers, and others to start companies from scratch. Some of those investments included:  ShipHero - $50 million  Sendle - $35 million  AxleHire - $20 million  Better Trucks - $3 million But not all of this investment meant that every company was going to expand. For example, PCF Final Mile, an existing logistics company that operated in the Northeast of the US, tested the small-parcel delivery market and exited rather quickly. As expected, mergers and partnerships started happening due to the influx of cash flow. LaserShip’s $1.3 billion purchase of OnTrac signaled the first and largest known merger. Their plans to expand to the center of the US will have a material effect on the small-parcel delivery market. The consolidations don’t stop there. UPS purchased Roadie to expand into crowdsourced same-day shipping.