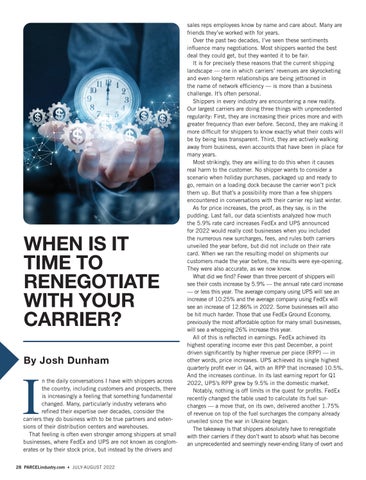 WHEN IS IT TIME TO RENEGOTIATE WITH YOUR CARRIER?

n the daily conversations I have with shippers across the country, including customers and prospects, there is increasingly a feeling that something fundamental changed. Many, particularly industry veterans who refined their expertise over decades, consider the carriers they do business with to be true partners and extensions of their distribution centers and warehouses. That feeling is often even stronger among shippers at small businesses, where FedEx and UPS are not known as conglomerates or by their stock price, but instead by the drivers and

sales reps employees know by name and care about. Many are friends they’ve worked with for years. Over the past two decades, I’ve seen these sentiments influence many negotiations. Most shippers wanted the best deal they could get, but they wanted it to be fair. It is for precisely these reasons that the current shipping landscape — one in which carriers’ revenues are skyrocketing and even long-term relationships are being jettisoned in the name of network efficiency — is more than a business challenge. It’s often personal. Shippers in every industry are encountering a new reality. Our largest carriers are doing three things with unprecedented regularity: First, they are increasing their prices more and with greater frequency than ever before. Second, they are making it more difficult for shippers to know exactly what their costs will be by being less transparent. Third, they are actively walking away from business, even accounts that have been in place for many years. Most strikingly, they are willing to do this when it causes real harm to the customer. No shipper wants to consider a scenario when holiday purchases, packaged up and ready to go, remain on a loading dock because the carrier won’t pick them up. But that’s a possibility more than a few shippers encountered in conversations with their carrier rep last winter. As for price increases, the proof, as they say, is in the pudding. Last fall, our data scientists analyzed how much the 5.9% rate card increases FedEx and UPS announced for 2022 would really cost businesses when you included the numerous new surcharges, fees, and rules both carriers unveiled the year before, but did not include on their rate card. When we ran the resulting model on shipments our customers made the year before, the results were eye-opening. They were also accurate, as we now know. What did we find? Fewer than three percent of shippers will see their costs increase by 5.9% — the annual rate card increase — or less this year. The average company using UPS will see an increase of 10.25% and the average company using FedEx will see an increase of 12.86% in 2022. Some businesses will also be hit much harder. Those that use FedEx Ground Economy, previously the most affordable option for many small businesses, will see a whopping 26% increase this year. All of this is reflected in earnings. FedEx achieved its highest operating income ever this past December, a point driven significantly by higher revenue per piece (RPP) — in other words, price increases. UPS achieved its single highest quarterly profit ever in Q4, with an RPP that increased 10.5%. And the increases continue. In its last earning report for Q1 2022, UPS’s RPP grew by 9.5% in the domestic market. Notably, nothing is off limits in the quest for profits. FedEx recently changed the table used to calculate its fuel surcharges — a move that, on its own, delivered another 1.75% of revenue on top of the fuel surcharges the company already unveiled since the war in Ukraine began. The takeaway is that shippers absolutely have to renegotiate with their carriers if they don’t want to absorb what has become an unprecedented and seemingly never-ending litany of overt and