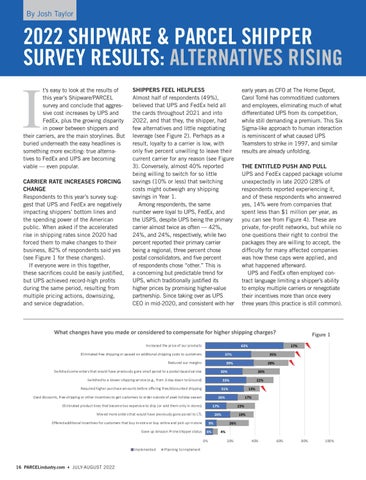 t’s easy to look at the results of this year’s Shipware/PARCEL survey and conclude that aggressive cost increases by UPS and FedEx, plus the growing disparity in power between shippers and their carriers, are the main storylines. But buried underneath the easy headlines is something more exciting: true alternatives to FedEx and UPS are becoming viable — even popular. CARRIER RATE INCREASES FORCING CHANGE Respondents to this year’s survey suggest that UPS and FedEx are negatively impacting shippers’ bottom lines and the spending power of the American public. When asked if the accelerated rise in shipping rates since 2020 had forced them to make changes to their business, 82% of respondents said yes (see Figure 1 for these changes). If everyone were in this together, these sacrifices could be easily justified, but UPS achieved record-high profits during the same period, resulting from multiple pricing actions, downsizing, and service degradation.

SHIPPERS FEEL HELPLESS Almost half of respondents (49%), believed that UPS and FedEx held all the cards throughout 2021 and into 2022, and that they, the shipper, had few alternatives and little negotiating leverage (see Figure 2). Perhaps as a result, loyalty to a carrier is low, with only five percent unwilling to leave their current carrier for any reason (see Figure 3). Conversely, almost 40% reported being willing to switch for so little savings (10% or less) that switching costs might outweigh any shipping savings in Year 1. Among respondents, the same number were loyal to UPS, FedEx, and the USPS, despite UPS being the primary carrier almost twice as often — 42%, 24%, and 24%, respectively, while two percent reported their primary carrier being a regional, three percent chose postal consolidators, and five percent of respondents chose “other.” This is a concerning but predictable trend for UPS, which traditionally justified its higher prices by promising higher-value partnership. Since taking over as UPS CEO in mid-2020, and consistent with her

early years as CFO at The Home Depot, Carol Tomé has commoditized customers and employees, eliminating much of what differentiated UPS from its competition, while still demanding a premium. This Six Sigma-like approach to human interaction is reminiscent of what caused UPS Teamsters to strike in 1997, and similar results are already unfolding. THE ENTITLED PUSH AND PULL UPS and FedEx capped package volume unexpectedly in late 2020 (28% of respondents reported experiencing it, and of these respondents who answered yes, 14% were from companies that spent less than $1 million per year, as you can see from Figure 4). These are private, for-profit networks, but while no one questions their right to control the packages they are willing to accept, the difficulty for many affected companies was how these caps were applied, and what happened afterward. UPS and FedEx often employed contract language limiting a shipper’s ability to employ multiple carriers or renegotiate their incentives more than once every three years (this practice is still common).