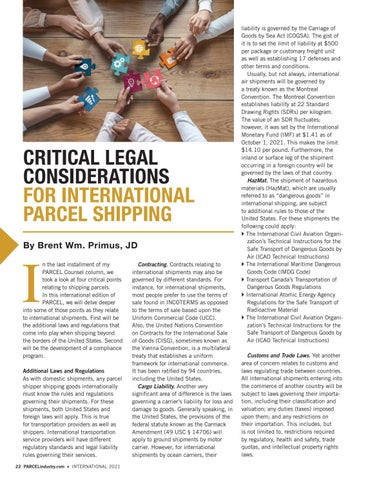 n the last installment of my PARCEL Counsel column, we took a look at four critical points relating to shipping parcels. In this international edition of PARCEL, we will delve deeper into some of those points as they relate to international shipments. First will be the additional laws and regulations that come into play when shipping beyond the borders of the United States. Second will be the development of a compliance program. Additional Laws and Regulations As with domestic shipments, any parcel shipper shipping goods internationally must know the rules and regulations governing their shipments. For these shipments, both United States and foreign laws will apply. This is true for transportation providers as well as shippers. International transportation service providers will have different regulatory standards and legal liability rules governing their services.

Contracting. Contracts relating to international shipments may also be governed by different standards. For instance, for international shipments, most people prefer to use the terms of sale found in INCOTERMS as opposed to the terms of sale based upon the Uniform Commercial Code (UCC). Also, the United Nations Convention on Contracts for the International Sale of Goods (CISG), sometimes known as the Vienna Convention, is a multilateral treaty that establishes a uniform framework for international commerce. It has been ratified by 94 countries, including the United States. Cargo Liability. Another very significant area of difference is the laws governing a carrier’s liability for loss and damage to goods. Generally speaking, in the United States, the provisions of the federal statute known as the Carmack Amendment (49 USC § 14706) will apply to ground shipments by motor carrier. However, for international shipments by ocean carriers, their