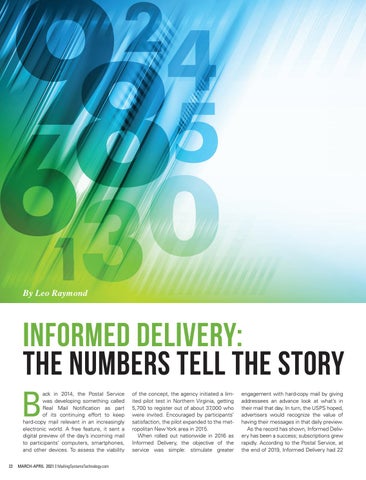 INFORMED DELIVERY: THE NUMBERS TELL THE STORY ack in 2014, the Postal Service was developing something called Real Mail Notification as part of its continuing effort to keep hard-copy mail relevant in an increasingly electronic world. A free feature, it sent a digital preview of the day’s incoming mail to participants’ computers, smartphones, and other devices. To assess the viability 22

of the concept, the agency initiated a limited pilot test in Northern Virginia, getting 5,700 to register out of about 37,000 who were invited. Encouraged by participants’ satisfaction, the pilot expanded to the metropolitan New York area in 2015. When rolled out nationwide in 2016 as Informed Delivery, the objective of the service was simple: stimulate greater

engagement with hard-copy mail by giving addressees an advance look at what’s in their mail that day. In turn, the USPS hoped, advertisers would recognize the value of having their messages in that daily preview. As the record has shown, Informed Delivery has been a success; subscriptions grew rapidly. According to the Postal Service, at the end of 2019, Informed Delivery had 22